Nick Saban jokes about becoming a part of the playbook 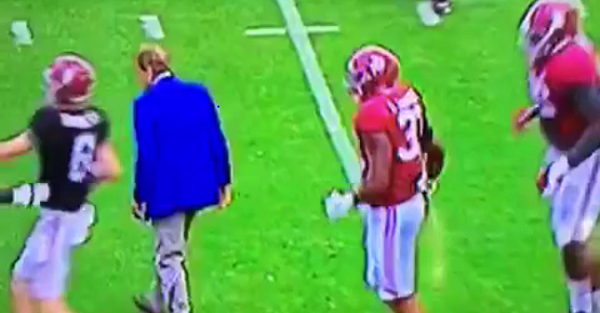 Alabama held its 10th A-Day Game under Nick Saban and he might have just experienced his first Saban screen and sack. Quarterback Blake Barnett was under heavy pressure and had to scramble from the rushers and thought using his coach as a screen was a pretty good idea. It almost worked out for him too.

Following the game, the coach humorously recounted the play.

“I think that on occasion — more than on occasion — when there’s a scramble, everyone seems to get attracted to me,” Saban told SEC Country’s Marq Burnett. “Sometimes when there’s an interception, there seems to be an unusual attraction for players to converge on me. I think it’s intentional to some degree, but as long as I don’t get hurt, I really don’t care. I usually can get out of the way, but I didn’t do a very good job of that today.”

Saban will have plenty of opportunities to avoid contact this season with everyone gunning for the Crimson Tide after they won the national title in January.