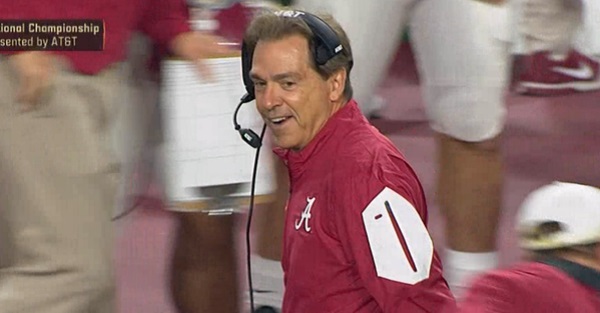 Alabama’s Nick Saban was on SportsCenter with Scott Van Pelt after Ohio State claimed the Big Ten Championship on Saturday night, and the clear topic of conversation was if Saban thought his Alabama team deserved a spot in the College Football Playoff over Ohio State.

Of course, Saban was in full support of his team, but he also took a clear shot at Ohio State by saying this:

Saban is referencing Ohio State’s 55-24 loss to Iowa earlier in the season, something that has been the biggest black mark so far on the Buckeyes’ resumé. Alabama also has the advantage when it comes to the loss column, with only one loss (26-14 at Auburn) while Ohio State has two.

For what it is worth, Sportscenter played the audio of Saban back when they later had Ohio State coach Urban Meyer on the show. Meyer seemed to find it comical.

It’s going to be a difficult decision for the Playoff committee, but it will come soon enough; the selections for the Playoff and New Year’s Six bowl games will be made on Sunday afternoon.