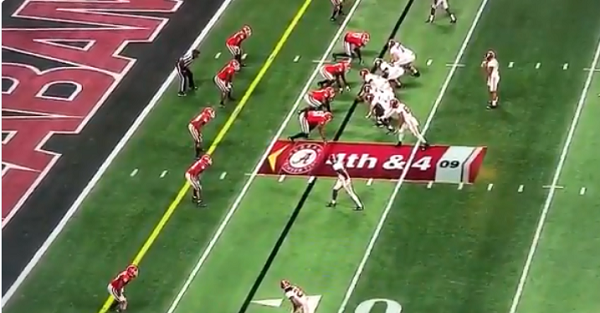 Alabama got the 26-23 win in overtime against Georgia in the National Championship, but they got to overtime thanks to a touchdown pass from true freshmen quarterback Tua Tagovailoa to Calvin Ridley. However, the play probably shouldn’t have ever happened. Take a look at the video below:

It looks like Najee Harris at the bottom of the screen got off the line of scrimmage way before the snap and the refs missed a blatant false start. This would have made it 4th and 9 at the 11-yard line and the playcalling may have changed or Georgia may have gotten the defensive stop it so desperately needed. Naturally, this sparked some outrage among Georgia fans.

Brutal job by Fowler and Herbstreit for not picking up this no-call false start penalty on tying TD. https://t.co/ehgg37nJbT

false start on 4th down on tying touchdown. guy was starting to run before even snapped. game is so questionable now in history. worse i have ever seen

While it was bad, it’s going to be hard to top that 2003 Fiesta Bowl finish between Miami and Ohio State with the pass interference that probably wasn’t a penalty. When people talk about questionable, that’s pretty much the benchmark for bad calls. While Alabama definitely got away with one, Georgia had its chance to win the game on a few occasions and failed to just get a first down on its last offensive possession that could have sealed the game.