This drunk, bloody Alabama fan is pretty much every Tide supporter after the national championship game 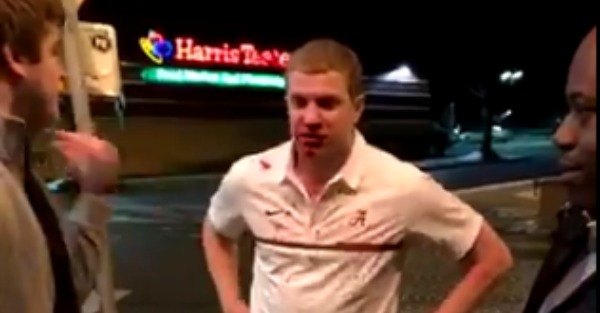 After all the success Tide fans have seen in the past decade or so, you would expect a few of them to have some pretty sordid reactions to such a crushing defeat Monday night.

After Clemson rallied to thwart Bama’s second consecutive national title with a thrilling 35-31 victory, this one Tide fan did. Alcohol was clearly a factor as this inebriated and bloodied dude in an Alabama shirt tried to make his way into a bar.

Fights breaking out over the game already. pic.twitter.com/IN2XL9RmvN

In the second clip, he tries to explain why he looks like he just climbed out of a cage match after getting smashed in the face with a folding chair. Unfortunately he enunciates like a guy who had about six too many drinks, then picked a fight with the wrong Clemson fan, so he’s nearly impossible to understand.

What are the chances that’s exactly what happened?