What this high school kept Alabama TE O.J. Howard from doing is infuriating 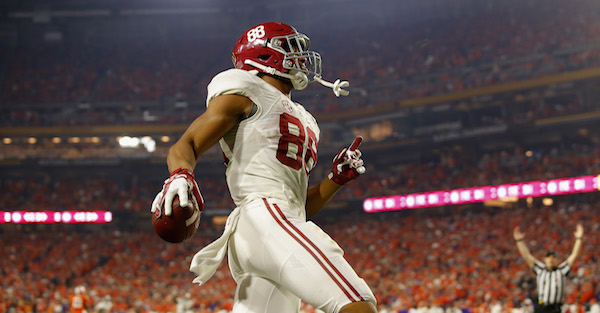 GLENDALE, AZ - JANUARY 11: O.J. Howard #88 of the Alabama Crimson Tide scores a 53 yards touchdown in the third quarter against the Clemson Tigers during the 2016 College Football Playoff National Championship Game at University of Phoenix Stadium on January 11, 2016 in Glendale, Arizona. (Photo by Kevin C. Cox/Getty Images)

O.J. Howard, a standout tight end at Autauga Academy in Prattville, Alabama, faced his fair share of issues. But one story detailed by AL.com on his time as a student in 2011 gave a shocking revelation on just how awful some areas were just years ago, and in some places still are.

According to the report (per SEC Country), and Howard’s mother, Lamesa Howard, the current Alabama star was told by then-headmaster Gene Carter that he, a black student, couldn’t take his white girlfriend to the school’s prom.

“When Lamesa Howard confronted Carter at the school, he informed her that the board of directors had instructed him to deliver the news to her son. When the parents confronted the board during an emergency executive meeting that same day, none took responsibility for giving the instructions.

Carter later called a school-wide assembly to apologize, then went on unpaid leave for three weeks. The parents have since found who on the board of directors was responsible for giving him the directive.”

Howard reportedly was allowed to invite his girlfriend to prom, and his sister went with a white male student as well.

Howard heads into his senior season at Alabama as top prospect at his position for next year’s NFL draft.

According to the report, the street right outside the school is being renamed “88 O.J. Howard Lane.”