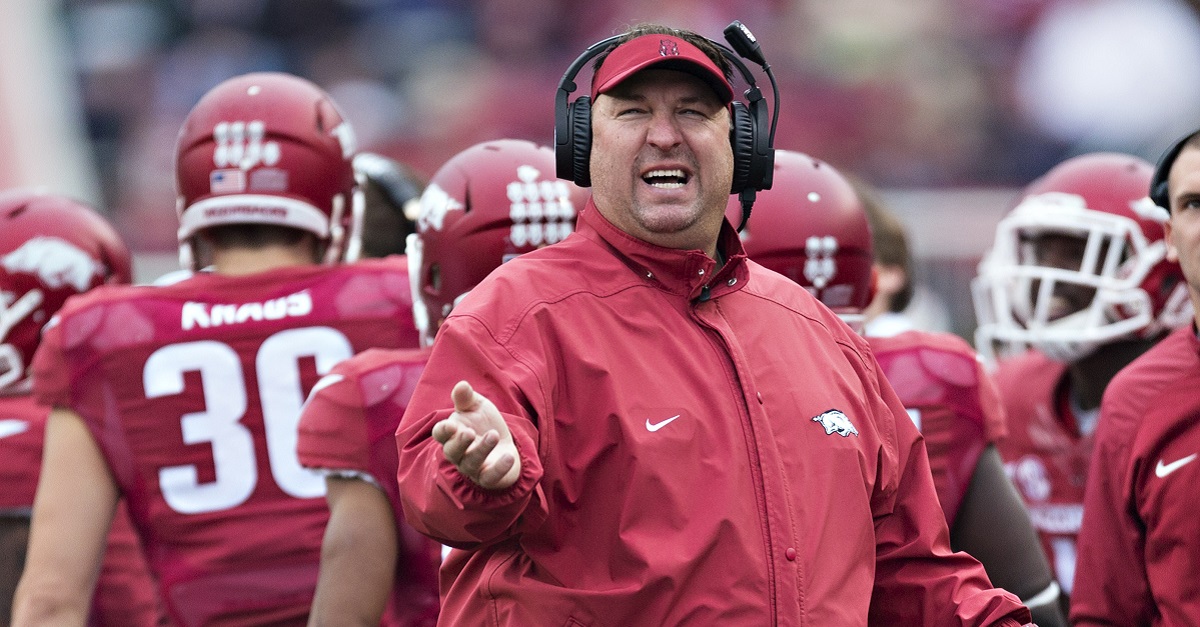 Literally minutes after Arkansas lost to Missouri on Friday to close their regular season, the school announced that they had fired head coach Bret Bielema.

#Arkansas has fired Bret Bielema after today's loss to Mizzou.

A press release announcing Bielema's firing was given to the media while we were waiting for his postgame press conference. He is still coming in to speak to the media.

Arkansas head football coach Bret Bielema has been dismissed by the University of Arkansas, it was announced by Interim Athletic Director Julie Cromer Peoples. Bielema completed his fifth season as the Razorbacks’ head coach Friday.

“Shortly after the completion of today’s game, I met with coach Bret Bielema and informed him of our decision to move forward with new leadership in the Razorback Football program,” Cromer Peoples said. “During the course of the past five seasons, we have not been able to sustain the success on the field that is expected and required at the University of Arkansas. There is no question that coach Bielema has been a valued and respected member of our department and has made a positive impact on the lives of our student-athletes, including supporting them in their pursuit of graduation. We are grateful for his contributions to our program and most importantly his investment in the lives of our student-athletes. We wish him the very best both personally and professionally.

“Our goal has been and will always be to compete and win at the SEC and nationally. I firmly believe that with all that the University of Arkansas has to offer, including our history and tradition, our facilities, our passionate fan base and competing in the nation’s best conference, we will attract the interest of many of the top coaches in the nation.”

Bielema joined Arkansas in the 2013 season, where he failed to capture much success compared to what Arkansas experienced in the late-2000s. In five full seasons in Fayetteville, Bielema finishes with a 29-34 overall record, including a dismal 11-29 in SEC play.

Bielema’s struggles at Arkansas are even more perplexing when you consider his tenure at Wisconsin. Bielema was 68-24 at Wisconsin — including four seasons of 10 or more wins — before jumping to Arkansas.