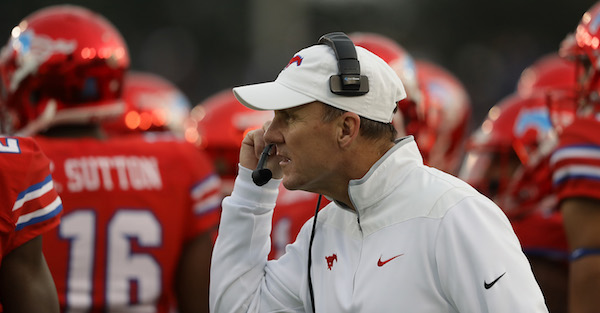 The coaching carousel was very busy in the SEC this year and one of the league’s head coaching hires was Chad Morris at the helm of the Arkansas Razorbacks. While there is plenty of reason to get excited about Morris and his impressive offensive resume, one prominent analyst is not quite as excited about the new era for the program, though it does not necessarily reflect on Morris individually.

Barrett Sallee of CBS Sports visited with Paul Finebaum and revealed that his skepticism with Morris actually revolves around his choice at defensive coordinator.

"I was very high on the Chad Morris hire at Arkansas until he hired John Chavis as defensive coordinator. I think the game has passed him by" – @BarrettSallee pic.twitter.com/p6CyOwKsPH

Morris elected to pull the trigger on John Chavis as the defensive coordinator and, obviously, Sallee is not a fan of that hire. At the age of 61, it isn’t as if Chavis is a spring chicken at this point and, over the previous three seasons, his work at Texas A&M came under real fire as the Aggies struggled to generate consistent performance on the defensive side of the ball.

To be fair, Chavis was lauded for his work prior to that at LSU, where he spent six seasons, and he was largely praised at Tennessee before that. The thought that Chavis, given his age, could be behind the times does seem reasonable, though, and Morris will likely be fighting against that belief as a result.

Arkansas may be dynamic offensively under Morris and, if they are, the defense will be under less pressure. If not, though, Chavis’ performance will be under the microscope and Sallee isn’t buying it.