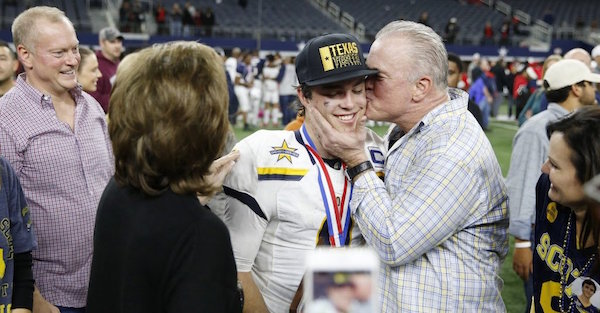 After long considering SMU as a finalist, Jones told 247Sports that he’s now deciding between Arkansas, his grandfather’s alma matter and Texas Tech, where he took an official visit last weekend.

“I’ve kind of ruled out SMU recently, so now it’s just Arkansas and Tech. At Tech, I’ve got a bunch of friends and family friends out there that I’ve known growing up, and it would be great spending time with those guys. Obviously, coach Kingsbury has a great history with quarterbacks and stuff, so that really stands out at Tech. Arkansas, I’ve got family ties with them and I’ve been to Fayetteville a bunch, got family that lives out there, and coach Morris is an incredible coach. He coached at SMU, I’m friends with his son, we have a pretty good relationship and have had one for a while, so that’s what stands out about Arkansas.”

Jones told the website he expects to announce his commitment either “Monday or Tuesday,” if not “early in the morning” on National Signing Day.