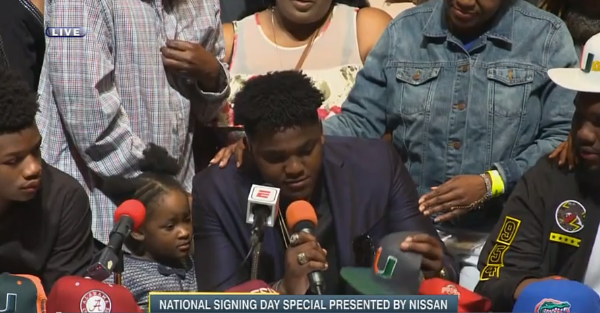 Four-star defensive end Andrew Chatfield had quite a moment on Wednesday during his recruiting announcement.

Watch in the clip below as he switches at the last second from Miami to Florida:

What made his recruiting announcement even more entertaining is he also held up a Chucky doll as he chose Florida in what has become somewhat of a tradition for Florida recruits. Chatfield finished his high school career with 41 sacks and is looking to become the next great defensive end at Florida.

In what has become a great trolling moment, Chatfield likely won’t be well-received among Hurricanes fans anytime soon.

Chatfield was one of the first major recruits to commit on Wednesday’s National Signing Day. He is rated as a four-star by all major services.