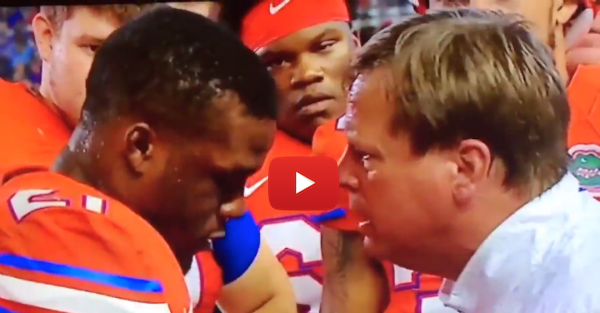 During Saturday night’s game between Florida and East Carolina, Florida running back Kelvin Taylor scored a seven yard touchdown run to put the Gators up 31-17 about halfway into the fourth quarter. After the play, Taylor made a throat slashing gesture, for which he was flagged for excessive celebration. Florida head coach Jim McElwain ripped Taylor a new one on the sideline for the penalty. We posted the video, without audio last night — you can watch it here.

Some audio of McElwain lashing out at Taylor was captured on social media — the NSFW language is bleeped out here. It’ll be interesting to see if the head coach issues some apology of some type — but in my opinion this is a moment between a player and a coach, that just happened to be captured on video thanks to us now living in the 21st Century.