Did Kash Daniel Try to Hurt Florida’s Kyle Trask, Then Lie About It? 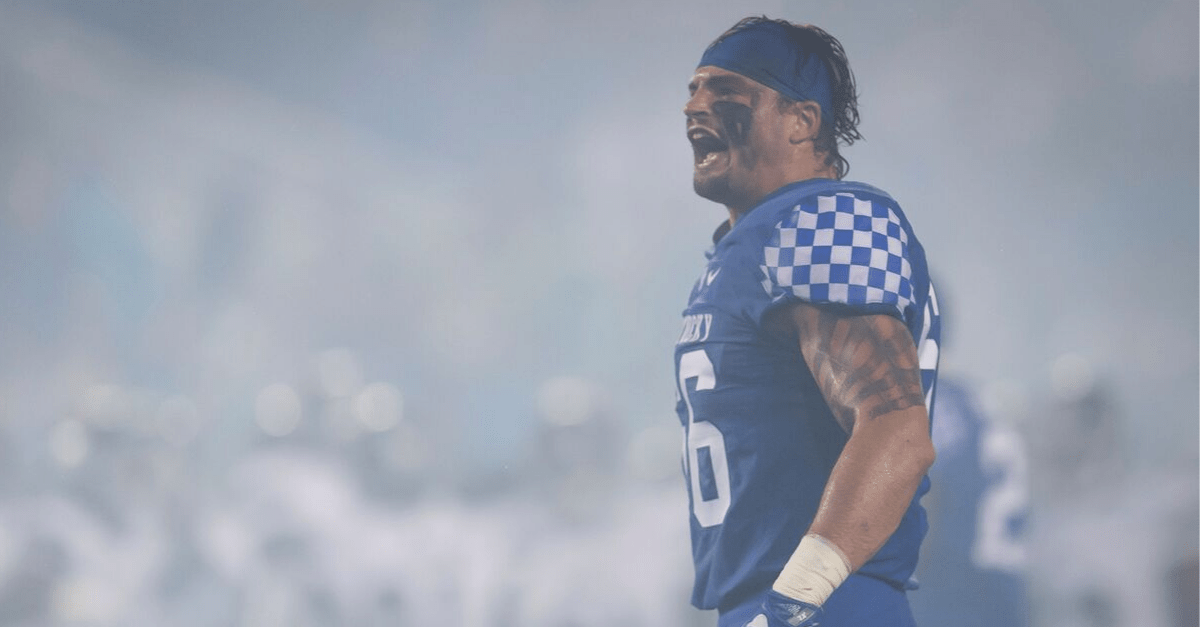 The biggest story in the Florida Gators’ 29-21 comeback win over the Kentucky Wildcats this season was by far UF quarterback Feleipe Franks’ season-ending ankle injury.

Florida played well without their starting passer behind backup Florida quarterback Kyle Trask’s impressive play and poise. Despite Franks’ injury, which will have an impact on almost every team in the SEC, you shouldn’t completely count out the Gators this season under Florida coach Dan Mullen.

But another ankle incident took place at Kroger Field in Lexington, Kentucky, and it’s been picking up steam on social media and deserves attention from the Southeastern Conference.

Let’s start with who’s being accused of what: Kentucky linebacker Kash Daniel has come under fire from Florida fans for allegedly twisting UF quarterback Kyle Trask’s ankle at the end of a failed two-point conversion attempt in the fourth quarter.

Florida sideline analyst and former UF tight end Tate Casey pointed the play out in this video. You can’t really tell what Daniel (No. 56) is doing while hunched over Trask, but Trask and him exchange some likely unpleasant words.

Tony you have it about 4 secs longer….? Kash Daniels is who I’m looking at but not during the play. You can tell a little here but not long enough. He spent about 5 secs trying to turn Trasks ankle over on bottom of the pile, then Trask faced him up after https://t.co/NBsSxfn7fi

We don’t know what was said, but we do know there is an exchange. That leads me to my first question: if Daniel didn’t do anything, why the chirping and appeared agitation from Trask?

Still, not enough evidence in that video to close our case.

But hold on. Here’s another angle from ESPN’s Skycam. Clearly, Daniel is either twisting something or pulling his hand pretty violently from the scrum. Either way, Trask immediately confronts him.

Maybe I'm just a big ol homer, but the Skycam angle makes it pretty clear to my eyes that @TateCasey84 was correct and @UKFootball's #56 Kash Daniels was working @GatorsFB's Kyle Trask's ankle – released it when he realized the ref was on top of them pic.twitter.com/06asJVQYi5

This led to Gainesville Sun reporter Graham Hall reaching out to the SEC league office on Monday to ask if the league was investigating the potential dirty play.

…Conference Office. Feedback on any issues discovered during this review are identified confidentially to the involved program and is appropriately addressed at that time.” (2/2)

So we won’t know unless Kentucky discloses anything.

Two days later, Daniel addressed the Kentucky media about the play. His response initially sounds believable until he tells reporters he’s been a victim of a dirty play himself and goes into a lengthy explanation regarding what happened at the end of the play.

Notice Daniel also avoids eye contact for much of the interview. And to wrap up his soliloquy, Daniel (maybe incriminatingly) says he plays with an “F-U mentality.” Interesting.

Kash Daniel’s response to whether or not he tried to intentionally injure Florida QB Kyle Trask pic.twitter.com/vuWONGdX3V

“Do I talk a lot of crap? Absolutely. Do I bump a dude here and there to get underneath his skin and talk while I’m doing it? Absolutely. That’s part of my game and what I do. But am I out there to deliberately hurt somebody? Absolutely not, I’ve kept my mouth shut about it I’ve been biting my tongue as long as I can because that’s actually something that I actually hold close to me. I’m a victim of a dirty play (in high school) and if you don’t believe me I’ve got a plate and seven screws in my right ankle to prove that. I’ve got a scar running halfway down my leg.

“So I’m not out there to hurt anybody. My hand that I had surgery on — this one got stepped on as it was going down — this surgically repaired hand has two screws in it and if enough weight’s on it, still hurts like a you know what.

“My hand’s caught underneath here, instantly gets stepped on. I’m trying to move s— around, I pull my hand out of there last second because I just pulled it out, there was — I got it stuck underneath a lineman’s leg with all that weight on it. Then I pulled it free from that, kept moving stuff, kept hitting legs and stuff and finally it came through. Maybe he felt something weird, I don’t know, but I’m not out there to twist nobody’s ankle or hurt nobody. End of story.”

I’m no lie detector or expert on human body language, but Google the signs and you can find them. Business Insider points out a couple of them like repeating words (he says “absolutely” multiple times in the beginning) and providing too much information (all he had to say was his hand was caught and he pulled it out).

Of course, this isn’t conclusive. I don’t know Daniel’s normal mannerisms. He could also have fully believed his own lie and therefore maybe not show signs of lying. It’s mostly speculation. The only hard evidence would have to come from a camera.

Thanks to a sideline angle from Kentucky local TV station WYMT News, it looks like we have that:

I don’t know about you, but this new video is as clear and convincing as I need. He has two hands around Trask’s right ankle and twists Trask’s foot in an aggressive manner. It’s a dirty play that makes him a POS alongside the likes of NFL defensive tackle Ndamukong Suh or linebacker Vontaze Burfict.

At this point, Daniel looks like a fool. He lied about the incident and made himself look worse. It also makes Kentucky look bad.

Trask weighed in to the Lake City Reporter’s Zach Abolverdi, saying “you all saw. It’s part of the game.” Abolverdi also asked Steve Spurrier about it, and he said it most definitely isn’t part of the game, for what it’s worth.

Not only should UK head coach Mark Stoops suspend Daniels, the SEC should take action as well.

“If subsequent review of a game by a conference reveals plays involving flagrant personal fouls that game officials did not call, the conference may impose sanctions prior to the next scheduled game.”

*patiently waits for sanctions and a scripted apology from Daniel*

I don’t know how often this happens, but I’d guess it’s more often than we realize or at least as often as cameras catch the act. Anyway, it takes away from what was otherwise a pretty good (yet injury-filled) game. Still, the SEC office shouldn’t let this go unchecked.

At the very least, Kash Daniel should have to buy Kyle Trask some new ankle braces, and maybe, just maybe, actually apologize for trying to hurt him and getting caught.