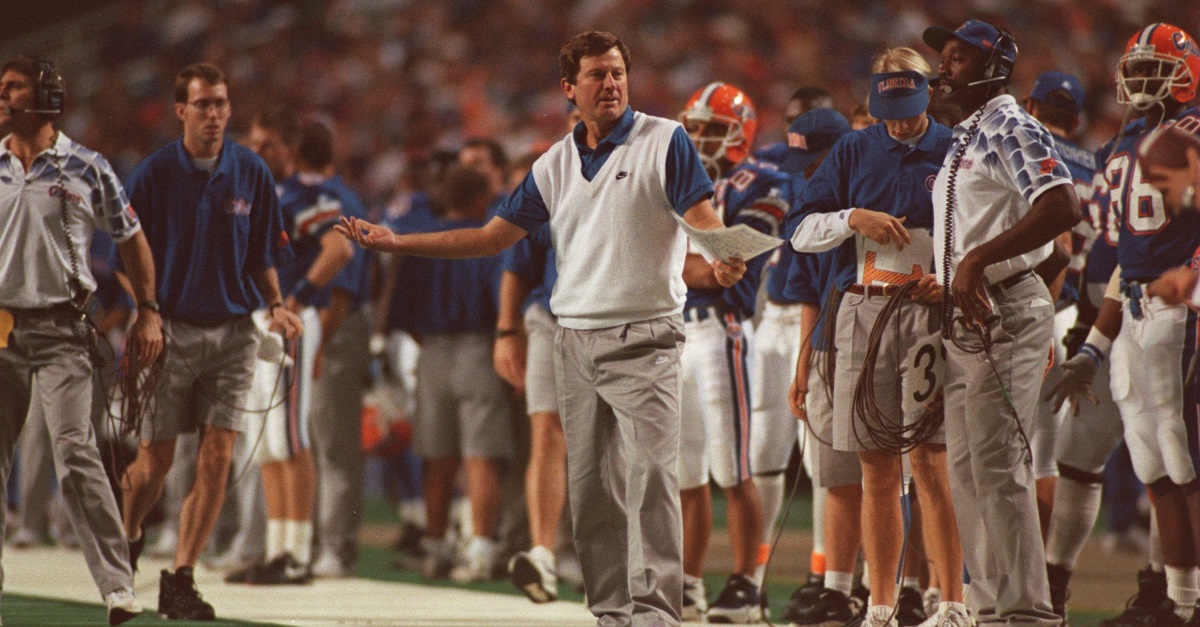 Doug Pensinger/Getty Images
3 Dec 1994: Head coach Steve Spurrier (center) of the Florida Gators walks onto the field to dispute a call during a play in the Gators 24-23 victory over the Alabama Crimson Tide in the SEC Championship game in Mobile, Alabama. Mandatory Credit: Doug

Steve Spurrier is a story teller at heart and if you let him talk long enough you will undoubtedly get a fantastic story out of him. That was most certainly the case once again when he randomly revealed a pretty funny story from the one time he was suspended in his 31-year coaching career.

It was early in his career when he was coaching Duke and the ACC decided to suspend him the last game of the season against rival North Carolina. Spurrier was allowed to hang with the team until an hour before kickoff and was supposed to leave the stadium at that time. He didn’t and he was still calling plays via a runner.

He had Duke’s golf director Ed Ibarguen running plays back and forth to running backs coach Carl Franks who had playcalling duty that day. Spurrier was suspended for the game because he publicly criticized ACC officials a week earlier about a defensive holding penalty that cost his team a win and a bowl invite.

ACC Commissioner Gene Corrigan decided that was enough, but Spurrier clearly had other plans as he decided he didn’t care about NCAA or ACC rules and pretty much coached that game anyway. Duke would go on to win 35-29 behind the mischievous misdoings of Spurrier and his secret runner — who had told no one about the incident except for his wife.

That’s how Spurrier stuck it to the man and just shows how truly competitive the man was even at the very beginning of his career. Now we have another story to add to Spurrier’s long and incredible legacy.