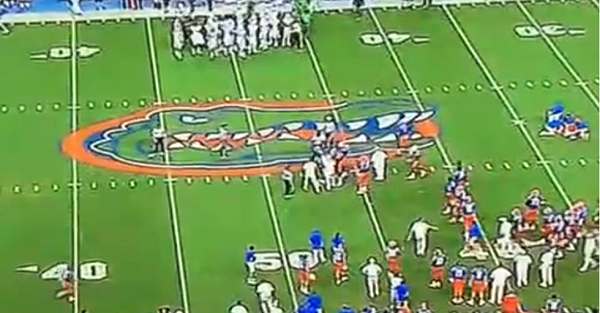 Florida coach Jim McElwain was understandably upset after his starting quarterback was taken off the field because of a hit below the knee. Luke Del Rio was hit by a North Texas defender who looked as if he launched himself for a tackle below the knee. The play earned a “roughing the passer” penalty, but also earned the hire of the Gators coach.

McElwain was so irate that he went out on the field and actually went after North Texas’ sideline. He had to be held back by his own players!

McElwain (and some players) at midfield screaming after Del Rio's hit. #Gators https://t.co/LcEPrn5WyE

The Associated Press caught the moment with a much closer look and picture:

Now that’s a coach I would want to go to war with. He clearly cares about his players and was about to risk a suspension himself to protect his guy.