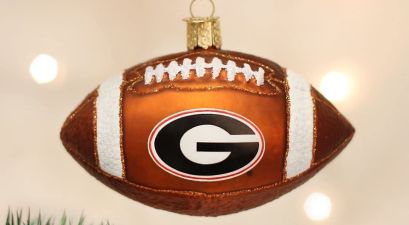 Deck the Halls for the Dawgs: 8 Christmas Decor Ideas for the Biggest UGA Fans Matthew Stockman/Getty Images
PASADENA, CA - JANUARY 01: Nick Chubb #27 of the Georgia Bulldogs, Jeb Blazevich #83, and Solomon Kindley #66 celebrate after Chubb scores a touchdown in the final minutes of the game 2018 College Football Playoff Semifinal Game against the Oklahoma Sooners at the Rose Bowl Game presented by Northwestern Mutual at the Rose Bowl on January 1, 2018 in Pasadena, California. (Photo by Matthew Stockman/Getty Images)

In what turned out to be a stellar game, the Georgia Bulldogs topped the Oklahoma Sooners in double-overtime, 54-48 to move on to the College Football Playoff National Championship game.

The Rose Bowl set the stage for what could have been the last time people saw Baker Mayfield in an Oklahoma uniform. Despite that possibility looming, the polarizing quarterback wasted no time in making sure the people in Pasadena knew he was the main attraction.

Without the first quarter even being over, Mayfield decided to refrain from some undergarment grabbing and instead focus on the weakest Undertaker impersonation this side of Parts Unknown.

It was a big game for Mayfield, especially getting off to a great start in the first-half. By the time the first two quarters were in the books, the senior tossed it around for 200 yards, with one of those going for a touchdown. It also helped that none of his passes were intercepted and Mayfield completed 13 of his 18 attempts.

To be fair to the Bulldogs, Mayfield also attempted to “rush” the ball four times, and somehow only managed to earn negative yardage (-6).

Mayfield dealt with flu-like symptoms leading up to the Rose Bowl, making his performance even more amazing. The quarterback entered the semifinal with the second-most passing yards (4,340) and passing touchdowns (41) in the country.

With No. 2 Oklahoma taking a 21-7 lead on a 41-yard Rodney Anderson touchdown run less than a minute into the second quarter of the Rose Bowl, No. 3 Georgia desperately needed to answer before a route took place. That answer came via running back Sony Michel, who on the team’s first play from scrimmage on the ensuing drive broke off a 75-yard touchdown run.

And now it's Sony Michel's turn! He breaks free for a 75-yard score to make it 21-14, Oklahoma.#GoDawgs #RoseBowl pic.twitter.com/uqusMAlLcE

After that, however, Oklahoma decided it wasn’t enough to have its quarterback tossing touchdown passes. The Sooners decided to get snazzy, having its signal-caller catch a TD.

There's so much offense in this game, Baker Mayfield is CATCHING TOUCHDOWNS. pic.twitter.com/OyaiK8h8F8

That Baker-ception should have been a sign that the Rose Bowl would end up being bonkers, but no one yet realized how insane everything in the game would be.

Things were looking good for Oklahoma at the half, but Georgia would come out in the third quarter swinging.

Thanks to the wonderful legs attached to running back Nick Chubb, the Bulldogs were able to cut the lead to seven in a hurry. In keeping with the trend of backs breaking for long runs, Michel would follow Chubbs’ lead, tying the game for Georgia by way of a 38-yard jaunt.

Of note, Georgia’s running back duo set an FBS record, combining for the most yards in the history of the sport at that level.

Entering the fourth quarter, the two squads each had 31 points. Mayfield, who we already noted threw it for 200 yards in the first-half, only tossed it around for 14 more in the third quarter. Maybe that early taunting was going to come back to haunt him — an aspect to the game that added more layers to an already wonderfully developed set of storylines.

Basically, the stage was set for a wonderful ending. Little did the nation know that the ending was not going to be determined in regulation.

The Sooners would not go into that dark night without a fight. Like a horror movie monster, with just under nine minutes left in the game, Mayfield would not die, connecting with Dimitri Flowers to end Georgia’s unanswered 24-point outburst.

Following the tying score, right after folks on social media began to question if the Sooners were choking, the Bulldogs not only coughed up the football, but watched as Oklahoma returned the fumble to take the lead.

Oklahoma gets the scoop and score in the #RoseBowl https://t.co/17weFljuIO

Georgia was not choking, though. In fact, with time quickly running out, Fromm led his squad to a game-tying score, only giving Oklahoma 55 seconds to get the win.

#UGA scores to tie up the #RoseBowl with less than a minute left https://t.co/juHM2jBPa5

College football’s collective chest was bursting at this point.

Despite some early movement in the fourth quarter’s last meaningful drive, Oklahoma’s offense was forced to punt, which resulted in Georgia deciding to let the game go to overtime after taking a knee to close regulation.

A single overtime was not enough for the Rose Bowl. After the championship contenders swapped field goals, it was off to a second OT.

Then it happened. Yes, it. Georgia would block an OU field goal attempt, setting up a walk-off game winner for the Bulldogs.

What a great game.