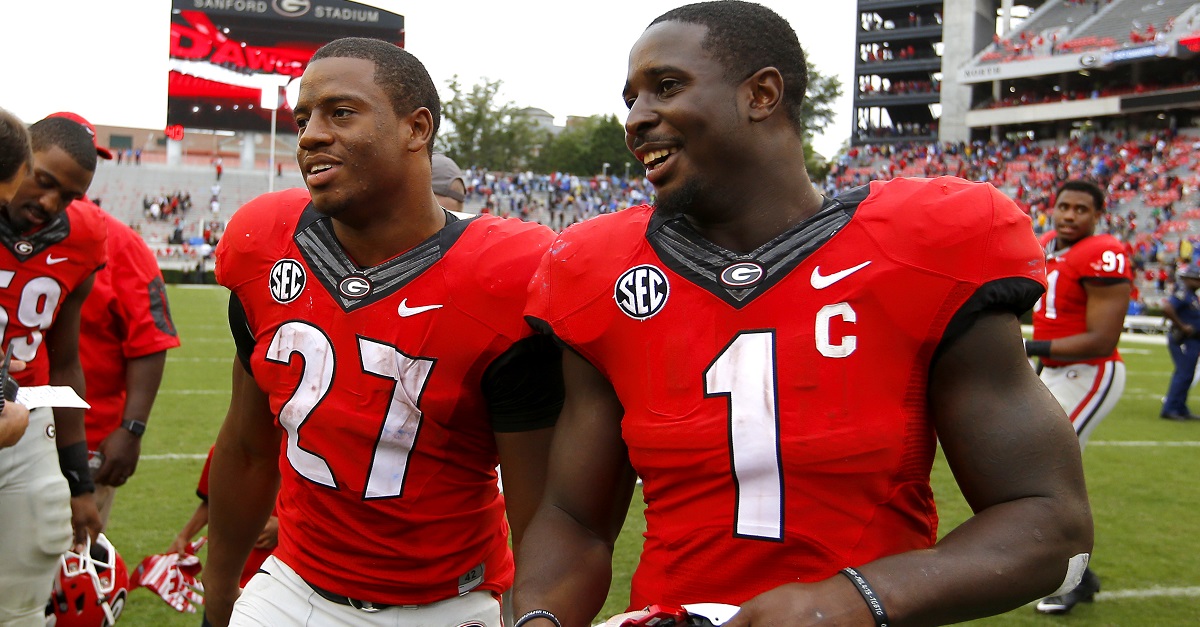 Todd Kirkland/Getty Images
ATHENS, GA - SEPTEMBER 26: Running back Nick Chubb #27 of the Georgia Bulldogs celebrates with running back Sony Michel #1 at the conclusion of the game against the Southern University Jaguars on September 26, 2015 at Sanford Stadium in Athens, Georgia. The Georgia Bulldogs won 48-6. (Photo by Todd Kirkland/Getty Images)

The Georgia Bulldogs rushing attack has been mediocre within the SEC, ranking No. 8 and only averaging 173.75 yards on the ground per game. That’s a sad stat considering the Dawgs have two NFL-caliber running backs in Sony Michel and Nick Chubb.

RELATED: Florida’s defense was historically great against Georgia on Saturday

The two backs only had 12 carries between both of them for a total of 21 yards against Florida on Saturday. Chubb got nine carries with none coming in the third quarter and Michel ended up with three carries for the game. While Florida does have a great run defense, there was no need to completely abandon the run.

That led to a little meeting with the running backs and offensive coordinator Jim Chaney. Chubb had a pretty simple question for Chaney, but one that could the answer to the rest of Georgia’s season.

?I asked him: Are we going to run the ball more?? Chubb said, recalling it on Wednesday. ?What?s your plan??

The answer was satisfactory enough for Chubb and Michel, but probably not so for the fans.

?What he said was true: We just weren?t good at running the ball that game, and they kind of out-played us, so we had to try something new,? Chubb said.

Chubb has had a wild season with all the ups and downs of the Space Mountain ride at Disney. He had 222 yards against North Carolina to start the season, but hasn’t hit 100 yards again except for 121 yards against South Carolina. Maybe Georgia just needs to play more Carolina teams to get the ship right. Is it too late to switch that up?