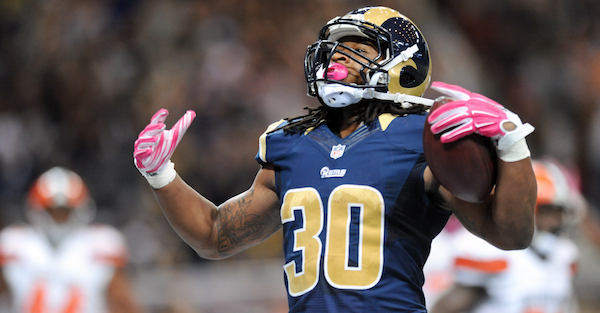 Todd Gurley is one of the most talented running backs in SEC history, but the Georgia legend could have signed with another team in the conference had he just been offered a scholarship.

?I kinda grew up a semi-LSU fan. I just kind of wanted that offer,? Gurley told TheSpun.com in an exclusive interview on Monday. ?I at least just wanted the offer, even if I wasn?t going to go there.?

Gurley only received offers from three SEC teams — Georgia, Auburn and South Carolina — during his recruitment, despite rating as a four-star prospect and rankings as the No. 6 running back and No. 73 overall player for the 2012 national recruiting cycle, according to the 247Sports Composite.

The Pro Bowler noted that his relationship with then-Bulldogs head coach Mark Richt and running backs coach T.A. McClendon played a key role his decision to spend his next three seasons in Athens.

?I had a good relationship with coach [Mark] Richt and coach [T.A.] McClendon, my running backs coach,? Gurley said. ?I just trusted in those guys. I knew Georgia had the potential and was the place for me. I kinda wanted to be in the SEC honestly.?

Fortunately for Gurley, everything worked out as he finished his college career ranked second — now fourth behind Nick Chubb and Sony Michel — on Georgia’s all-time rushing list with 3,285 yards before  being selected by the Rams at No. 10 overall in the 2015 NFL Draft, despite missing the majority of his junior season due to an ACL tear.