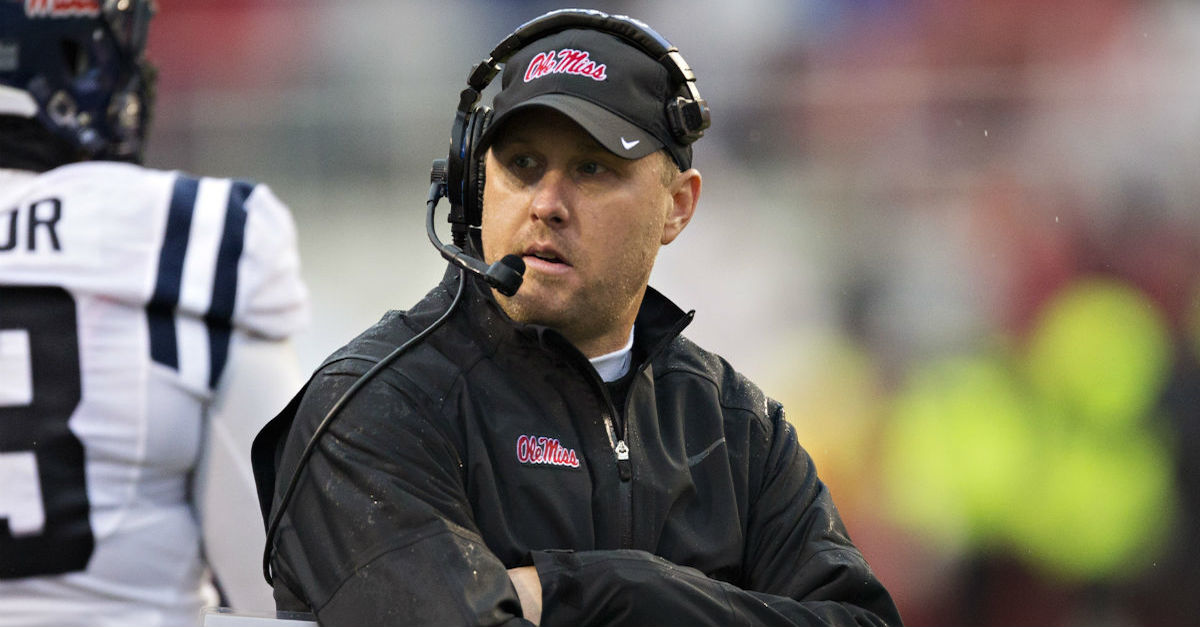 UPDATE: It now appears that Houston Nutt and his attorney Thomas Mars are going further in their pursuit of Ole Miss, as Yahoo’s Pat Forde is now reporting that Mars has requested the phone records for Ole Miss athletic director Ross Bjork.

Nutt and his attorney had previously requested the records for Ole Miss coach Hugh Freeze in their lawsuit against the school. The records were the reason Freeze was forced to resign from the head coaching position last week.

Houston Nutt and his attorney’s takedown of Ole Miss and Hugh Freeze has taken an unreal turn, as it turns out help from a rival Mississippi State fan site helped in the discovery of a call from Freeze’s Ole Miss cell phone to a female escort service, according to Yahoo Sports. That discovery eventually led to an internal investigation that forced a chain reaction of Freeze’s eventual resignation last week.

Thomas Mars reportedly acquired phone records from a “random” three-day stretch (January 19-21, 2016). With the help of Steve Robertson of Genespage.com, they poured through the phone records and eventually found the number.

According to the report, when Nutt was brought forward the escort service bombshell, he did not want the information to go public. It was Mars, his attorney, who encouraged him to move forward with the info.

?It has to do with establishing exactly what we alleged in the complaint,? Mars said. ?[Freeze] has portrayed himself as a virtuous role model for young men. If people had believed that, they might disbelieve that he would launch a very deliberate smear campaign ? that was very hurtful to Houston?s reputation.”

Mars and Nutt are seeking a public apology from Ole Miss from the portrayal of Nutt as the problem stemming from a 2016 NCAA Notice of Allegations. They’re also reportedly seeking compensatory cash for damages. In short, Nutt alleged repeatedly that Freeze and the Ole Miss power structure spread misinformation about the former head coach and Nutt filed a lawsuit against Ole Miss as a result.

As you might expect, Houston Nutt's lawyer had some things to say about the events at Ole Miss tonight and Hugh Freeze. pic.twitter.com/QmBcq8AMsP

The highlighted section reads as follows:

?The revelations that have come tonight and the reason for Freeze having to resign really bears on his character. And I think it is further evidence of the fact that we have said all along and that is the public persona of Hugh Freeze is not the true Hugh Freeze. His efforts to do everything he could to blame all of the university?s problems on Houston Nutt were carefully orchestrated and were just flat false. This is just a prime example of what we have tried to show in our complaint.

?I don?t think Houston Nutt needs vindication. We drafted a very detailed complaint. He is complete and total victim in this and he doesn?t need vindication. It?s sad that the university did not deal with this the way they should have. And if they had dealt with Houston Nutt appropriately to begin with he would not have been besmirched, he would have been treated appropriately and fairly consistent with the severance agreement that all of them signed. And interestingly enough, Hugh Freeze would probably still have his job.?

This qualifies as something of a victory lap for Nutt and it comes as no surprise given that, in short, he was proven to be right in this case. The Ole Miss athletic department essentially indicated that Freeze would have been fired if he had not resigned but, aside from that, Nutt’s statements ring true and as a reminder of how important the treatment of others can be, even in college football.