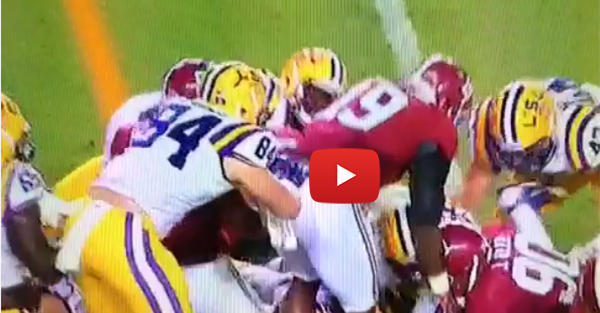 Ask any football player and they will tell you the worst place to be on a football field is the bottom of the pile. Players are ruthless in there poking and grabbing each other. They’ll also tell you not to stand next to the pile because you might get knocked over.

What they don’t ever say is “don’t stand by the pile because someone might pull down your pants.” Maybe they should…

LSU’s Logan Stokes took to Twitter after the game to explain he was trying to pull Ragland off the pile and his pants ripped. It’s still pretty hilarious.

I was trying to yank him off the pile and his pants ripped not pants him. My bad

Since the whole world is in a frenzy that I accidentally pulled a guys pants down at least tag tosh.o so he will use the video please lol

And also please stop sending me gay death threats lol geez it's not that serious people no need to get that upset about it.

Don’t send threats to him. Please. Just laugh at the absurdity of the video.