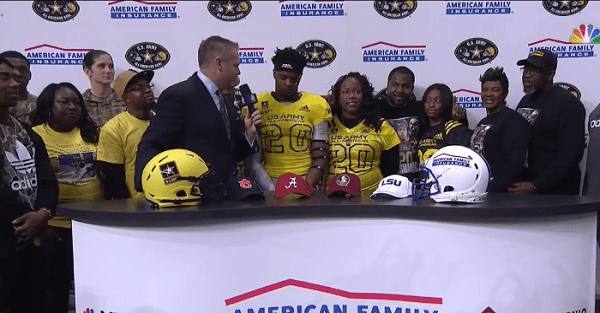 Four-star safety Kelvin Joseph (6-foot-1.5, 191 pounds) announced his commitment to LSU during the third quarter of the U.S. All-American Bowl Game on Saturday.

Joseph ranks as the No. 4 safety, No. 3 player from the state of Louisiana and the No. 37 overall prospect for the 2018 national recruiting cycle, according to the 247Sports Composite.

The Baton Rogue native received offers from 20 teams and chose the Tigers over Alabama, Auburn and Florida State.

Joseph is expected to continue making his official visits leading up to National Signing Day next month, which includes LSU on Jan. 20, Alabama on Jan. 27 and Auburn on Feb. 2, according to SEC Country.