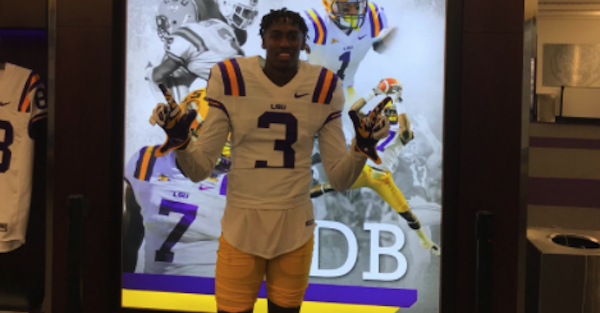 A lot of 2019 prospects are beginning to wade through multiple offers in search of a narrowed list and Marquez Beason appears to be one of them. The rising senior athlete prospect from Dallas ranks as the No. 54 overall prospect in the 247Sports composite and, with that ranking as the backdrop, his list of available options is quite impressive to say the least.

Now, though, Beason is ready to set his top schools and, in speaking with Brian Perroni of 247Sports, he did just that.

“My top schools, they’re A&M, LSU, Baylor, Illinois, Florida, SMU and Ohio State,” he said. “Those are the ones I’m considering.”

Beason stands at 5-foot-11 and 173 pounds and programs are reportedly recruiting him at both wide receiver and defensive back. What is clear, though, is that he is a tremendous talent with a real chance to make an impact at the Power 5 level and a list of possibilities that includes Texas A&M, LSU and Ohio State (among others) drives that point home.

Like the rest of his classmates, Beason has plenty of time to further narrow his options but he now has a top-seven of sorts and his group includes some wildly intriguing options for his college choice.