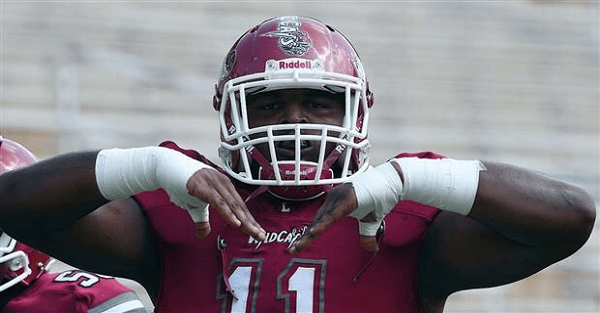 Five-star 2019 defensive end Charles Moore told 247Sports on Saturday that he has committed to Mississippi State.

Moore, a 6-foot-4, 240-pound prospect, ranks as the No. 3 strong-side defensive end, No. 27 overall player and the top recruit from the state of Mississippi for the 2019 national recruiting cycle, according to 247Sports’ Composite rankings.

As a sophomore, Moore recorded 71 tackles, including 21 for loss, eight sacks and 24 quarterback hurries. However, he will miss his junior year due to injuries, which didn’t deter Mississippi State during his recruitment, a factor that he said was a key component to his decision.

“It actually is like family to me and I’m at home,” Moore said of his commitment. “After I got hurt they let my coaches know they they were there for me and that I still had a home that’s loyalty.

And he’s going to be very big on the defensive line for the Bulldogs when he lands on campus in two years.