Paul Finebaum: ‘It’s time to tell the truth’ about the SEC’s dominance 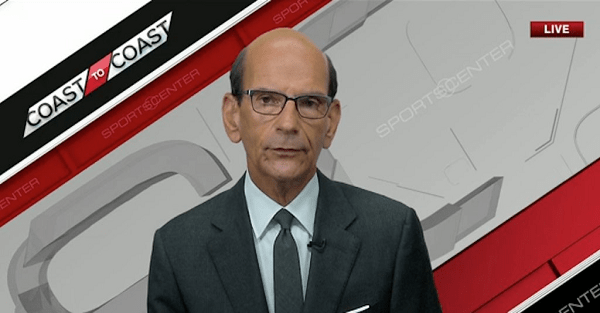 ESPN’s Paul Finebaum, dubbed by many as “Mr. SEC,” declared the official end of the SEC’s dominance over college football during an appearance on Outside the Lines earlier this week.

Finebaum blamed “poor coaching” as the main culprit for the conference’s move back towards the pack.

Is the dominance of @SEC a thing of the past? pic.twitter.com/hOhCA2Qa2f

During an appearance on Mike and Mike Thursday morning, Finebaum reiterated his stance, claiming that SEC fans need to “tell the truth” and admit that the league no longer has a stronghold over college football as it did 5-10 years ago.

Paul Finebaum agrees with critics that the SEC isn't the powerhouse it once was and offers some perspective into why: pic.twitter.com/eiEjIF5E9d

Earlier this week, USA Today?s Dan Wolken claimed that seven SEC coaches could end up on the hot seat this year.

“Three weeks into the season, as it turns out, dissatisfaction around the SEC is worse than anyone even imagined in June and July,” Wolken wrote. “Among those who were perceived to be on the hot seat ? Texas A&M?s Kevin Sumlin, Auburn?s Gus Malzahn, Arkansas? Bret Bielema and Tennessee?s Butch Jones ? nobody has done anything thus far to help their case.

Finebaum also noted Nick Saban’s impact on other SEC coaches during his initial claim about the SEC’s declining dominance.

?A lot of people want to blame it on Nick Saban but I would strongly disagree. The issue, I think, is the coaching in the SEC. You go back eight or nine years when the SEC was winning six straight BCS championships, you had Spurrier, you had Mark Richt, you had Les Miles, you had Bobby Petrino, you had Urban Meyer. Now, they?re all gone and the replacements have not been very good.

Since Saban’s arrival in 2007, every single other SEC team has gone through at least one coaching change. Talk about inconsistency.