Unlike College GameDay, SEC Nation will be heading to an actual game next week 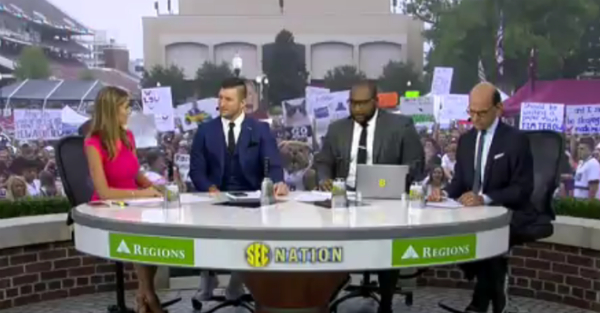 ESPN’s College GameDay recently shocked the sports world by announcing that it would air live from New York City for week four.

That was shocking for two reasons. The first being that the show usually announces one week at a time, so ESPN obviously felt this was a big enough deal to break that rule. The second reason is the strange one, though, and it’s a reason that has many college football fans up in arms.

For the first time ever, we're headed to New York City next week! pic.twitter.com/VVhGw9vjwZ

Part of the charm of GameDay is that it highlights one campus every weekend, and it really helps add to the big-feel atmosphere of that game. The fans get there early and are excited for a chance to be on television, and when Lee Corso picks their team — or picks against their team — they always go wild.

College GameDay has become part of the college football experience, so it’s shocking that the show will air live from a location that isn’t a campus. There aren’t even any big games being played in the NYC area.

That’s going to be an interesting show to watch on ESPN next weekend, if only for the novelty of it. Meanwhile, fans watching on the SEC Network will be treated to a pre-game show that’s actually on campus. The SEC Network has announced that its SEC Nation show will be live from The Ingram Commons covering what could end up being a good matchup between Vanderbilt and sure to be No. 1 Alabama (the Crimson Tide play Colorado State this weekend).

Next Stop: Nashville!#SECNation is headed to No. 1 @AlabamaFTBL vs @VandyFootball. See y'all next Saturday. pic.twitter.com/w8ZFZz63TQ

While Vandy and Alabama football normally don’t find themselves in the same universe as far as hype is concerned, it is worth noting that these are two of the best defenses in the conference. In Alabama, the Crimson Tide actually boast one of the best defenses in the nation, but that’s not to take away from Vanderbilt. Two games in and the Commodores are 2-0. They beat Middle Tennessee 28-6 to start the season off with a big win. In week two, they beat Alabama A&M, 42-0. That’s just six points given up in two games, which isn’t shabby.

Sure, those two teams combined don’t even add up to one Crimson Tide squad and Vandy still has to play No. 18 Kansas State this weekend, but this is still a matchup that may end up being fun.

And at the very least, there will be a pregame show live on campus.