Michigan, South Carolina players nearly throw down at event leading up to the Outback Bowl 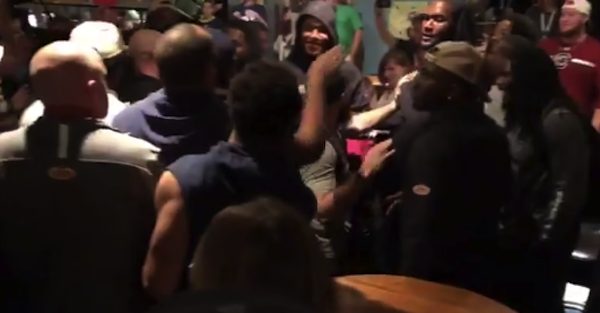 With some other high-profile match-ups set to take place on New Year’s Day, the Outback Bowl battle between the Michigan Wolverines and the South Carolina Gamecocks is not necessarily receiving a great deal of national attention. After the events of Wednesday night, though, there might be more of a microscope on the festivities from Tampa.

In short, a pre-game event featuring both teams at a local bowling establishment turned into something of a near throw-down, as members of the squads were captured jawing and exchanging unpleasantries in front of live cameras.

A fight nearly broke out between #Michigan and #SouthCarolina at Splitsville. pic.twitter.com/ghzbCVNzWA

Of course, it has to be noted that no real physical scrum actually took place but it is definitely noteworthy when two Power 5 squads nearly square off in an off-field setting.

Jim Harbaugh and Will Muschamp have reputations for their no-nonsense approaches and, apparently, both teams are focused on this particular match-up to the point where temperatures are already running hot many hours before kick-off. The Wolverines are seen as Las Vegas favorites in the neutral field contest but, if nothing else, this should provide motivation for both parties and a bowl atmosphere that might be a little more intense than the average Big Ten versus SEC match-up in early January.