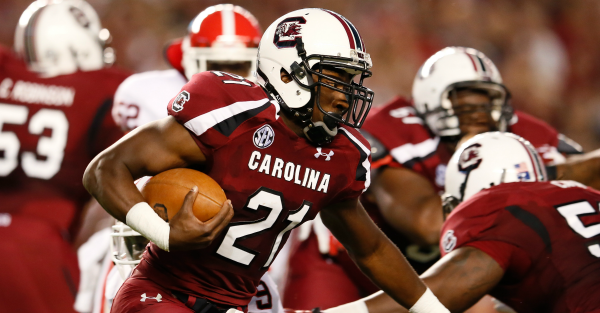 South Carolina has an ambassador for life in former running back Marcus Lattimore. He owns the school record for rushing touchdowns in a career (38) and in a single season (17) and was taken in the fourth round of the NFL Draft by the San Francisco 49ers.

He retired after only two years because of injuries, but is around the South Carolina program quite often and new coach Will Muschamp contacted Lattimore about some kind of position with the team before he was ever hired, wanting the Gamecocks? career leader in touchdowns around in some capacity.

However, the NCAA is having none of that as Lattimore confirmed to The State. The NCAA has stated that Lattimore cannot join Will Muschamp?s staff at USC due to Lattimore?s status as a former player and his presence through football camps and foundation. The NCAA considers it an unfair recruiting advantage.

That’s the reason? So we’re going to pretend like Duke having former players like Jon Scheyer and Nolan Smith on the staff isn’t exactly the same thing? Where do we draw the line on this one? Isn’t football all about finding recruiting advantages anyway?