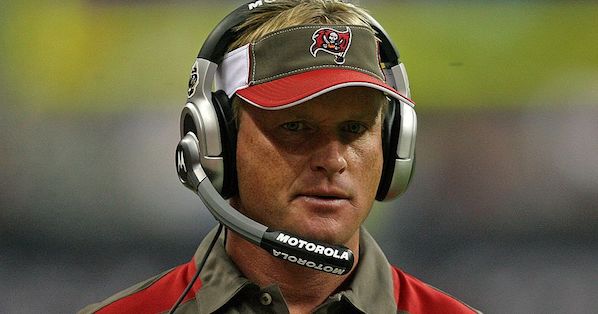 That’s all it will take to get Tennessee fans in a frenzy.

While it’s likely something he’s said numerous times during his nine seasons in the booth, it’s more notable now as he’s currently rumored to be the odds on favorite to replace Butch Jones as the Vols’ next head coach.

On Sunday, The Read Optional’s Oliver Connolly reported that Tennessee offered Gruden “over $10 million a year” to take over next season.

Gruden’s past ties to the Tennessee football program have led Vol fans to believe that the former Super Bowl winning coach could possibly take over on Rocky Top.

I’m trying not to get too excited here.

As a UT alum, I’ve gone into Monday Night Football games thinking, “do you think he’ll say anything about us?”

Gruden is Tennessee’s absolute No. 1 option and whether its a pipe dream or not is irrelevant now. If there’s any chance that John Currie and the UT athletic department can land a former Super Bowl champion coach with passionate ties to the university it should be a top priority.

The Vols haven’t made an impactful hire since Lane Kiffn and although many will argue that was a bust, it still provided more of a spark in one season than being cheap and bringing in Derek Dooley and Butch Jones for a discounted price did for several years. However, Gruden would exceed Kiffin tremendously in terms of past accolades and name value.

This would be an absolute home run hire for Tennessee. Any doubt about whether Gruden can coach or recruit at the college level is ridiculous. Every teenage football prospect already knows who he is. All he’d need is to hire a staff of masterful recruiters and be the closer — and nothing closes a deal like a handshake while wearing a Super Bowl ring.

Tennessee would have its pick of any top quarterback prospect in the country given his reputation working with the position and the “Gruden’s QB camp” specials that have aired on ESPN for several years leading up to the NFL Draft. The Vols would also have a coach who is actually capable of working with the talent that they already have instead of hindering it with a so-called “infallible” system.

Maybe I’m setting myself up for disappointment by feeding into these rumors but something does feel real about them this time. I still have little faith in Currie, but am still holding out hope that he’s letting Jones coach longer because Tennessee already has his replacement in mind.

If Gruden is set to be the next coach at UT, expect big things on Rocky Top.