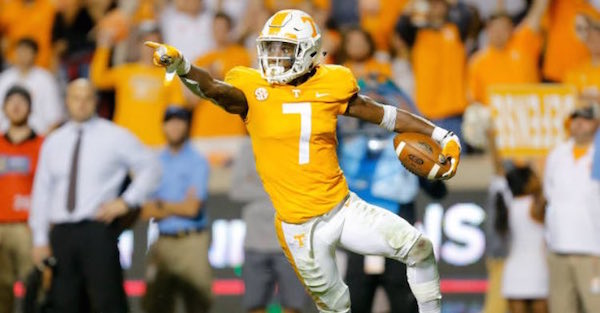 Tennessee junior cornerback Rashaan Gaulden announced his decision to forego his senior season and declare for the 2018 NFL Draft on Wednesday via Twitter.

“After a lot of thought, prayers and counsel from my family and close friends, I have decided to enter the 2018 NFL Draft,” Gaulden wrote in his note. “It has been an honor to wear the Orange and White, and represent the Power T while playing in Neyland Stadium the last four years.”

Gaulden was arguably the Vols’ best defensive player of the 2017 season, serving as a starter at the nickelback position.

The junior recorded 65 tackles — which ranked fifth on the team — and led Tennessee with three fumble recoveries and three forced fumbles, while also recording an interception.

But he will perhaps be most remembered for what was arguably the highlight of the Vols’ season, his double middle finger celebration directed at Alabama fans following Daniel Bituli’s pick-six touchdown.

Gaulden is the second Tennessee player to declare early, joining running back John Kelly, who announced his decision last week.