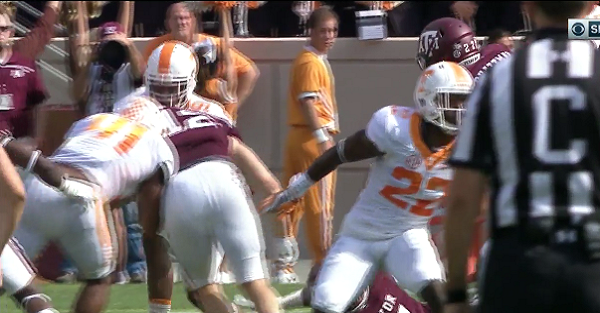 Tennessee has shot itself in the foot several times during the Texas A&M game. Defensive back Nigel Warrior was ejected for absolutely annihilating Aggies 12th man Cullen Gillaspia. Warrior went out of his way to go after Gillaspia because he put a nasty hit on Evan Berry on a Tennessee kick return earlier in the game.

RELATED: Tennessee player destroys Aggies 12th man and gets ejected for it

The hit did not look to be clean at all as Gillaspia not only led with his helmet, but caught Berry right under the chin strap.

There was no flag for that hit and that has made some Vols fans pretty upset.

Question: how was targeting not called on the Evan Berry hit/fumble?

So Verne and Gary aren't even going to mention the helmet to helmet hit on the Evan Berry fumble. @CBSSports #Tennessee #reviewable

@NCAA if you want to use a film on targeting, use UT vs. TAMU Evan Berry. Your crew just blew it and a player is concussed. Great job.

Helmet to helmet blow not called, that's why Evan Berry fumbled, but they blind #TENNvsTAMU

#TENNvsTAMU govols @espn @TimBrando that hit on Evan berry should have been reviewed. Didn't JRM get ejected for something like that?

Helmet to helmet contact on Evan Berry. Butch Jones has every right to lay into the official. #terrible

@CBSSportsCFB Please let me see the hit on Evan Berry's fumble again. It looked like #12 lowered helmet and hit him in the face. #noflag

Or targeting? He has the mark from Evan Berry's face mask ON THE TOP of his helmet https://t.co/7p39WpoKvv

I would be angry too since the fumble led to a score for the Aggies and has given them a ton of momentum in this game.