Tennessee deciding to retire one tradition after only five years 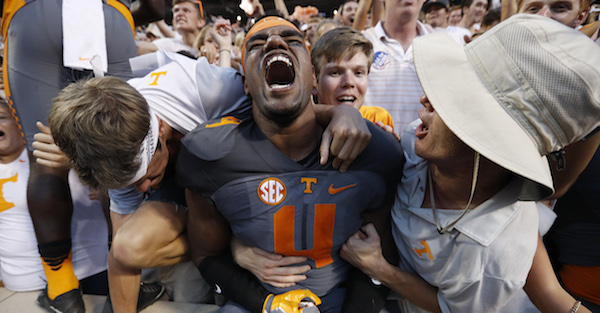 Tennessee reportedly plans to stop wearing the “smokey grey” jerseys that debuted under Butch Jones’ tenure, instead sticking to the traditional orange and white, all orange and all white combinations and will only wear black cleats, sources confirmed to FOX Sports Knoxville.

Not to sound like an old man yelling at a cloud, but I think this decision provides more positives than negatives. Yeah, the smokey greys were cool for like — what — two quarters?

I know there are purists that absolutely hate the idea of the Vols wearing anything but their traditional orange and white threads, but I won’t go that far.

I’m more against the Butch Jones-esque gimmicks than anything. I don’t want to see anything that resembles “brick by brick” or moral victories in this culture change of the Tennessee football program.

The Vols don’t need to rely on gimmicks anymore. Hopefully the coaching and on-field talent will be enough to gain the attention of recruits, rather than “smokey grey” jerseys.