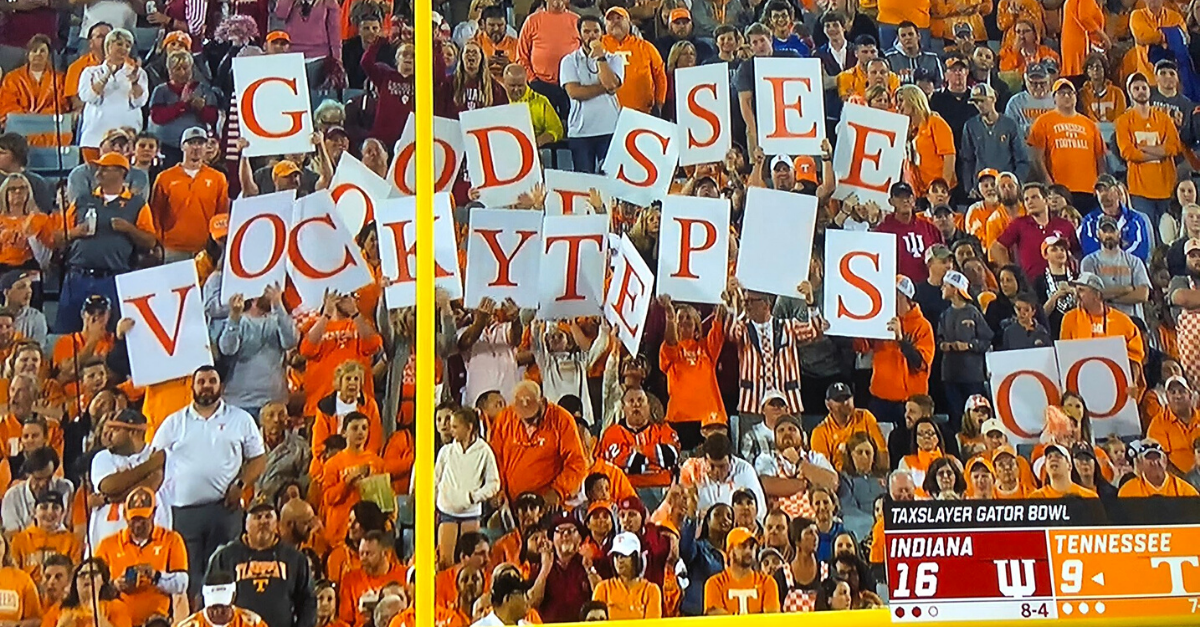 Before the Tennessee Volunteers erased a 13-point deficit in the final five minutes of the TaxSlayer Gator Bowl to stun the Indiana Hoosiers, teams in that scenario were 0-471 this season. The Vols’ sixth-straight win of the season was Tennessee’s first bowl game victory since Butch Jones was head coach in 2016. Suffice to say, Jeremy Pruitt’s football team closed the season hotter than the return of Wendy’s spicy nuggets.

The turning point of the fourth quarter came following a 10-play, 82-yard drive punctuated with a Quavaris Crouch 1-yard touchdown plunge. On the ensuing kickoff, kicker Paxton Brooks rolled a surprise onside kick into the waiting arms of running back Eric Gray, who then scored the go-ahead touchdown just three plays later.

Gray led Tennessee in rushing with 14 carries for 86 yards and the game-winning TD, caught two passes for 34 yards, recovered that critical onside kick, and was rightfully named Most Valuable Player.

Reported attendance at TIAA Bank Field in Jacksonville, Florida was 67,862 people. All of them saw a fantastic, comeback finish on Thursday night, but a tribe of SEC fans made one of the most hilarious gaffs you’ll see all year, and we are only a few days into 2020.

In the third quarter, ESPN cameras spotted some excited Vols fans behind the end zone holding up single letter signs that were supposed to read “TENNESSEE VOLUNTEERS” on one side and “GOD BLESS ROCKY TOP WOO” on the other.

Instead, these Tennessee football supporters flopped in their moment of glory and were caught spelling “GOODSEE VOCKYTEPS OO.” Naturally, Twitter had a field day.

What in the hell was this supposed to say? pic.twitter.com/maCaNwJMdb

The SEC is 7-2 in bowl games thanks to the Vockyteps from Tennessee. pic.twitter.com/6W24zkRIO6

Indiana quarterback Peyton Ramsey played valiantly ? he finished 20-of-34 for 227 yards passing and ran 17 times for 54 yards and one touchdown ? but the Hoosiers and coach Tom Allen ultimately lost three of their last four games to finish 8-5 on the year. IU hasn’t posted a 9-win season since 1967.

As for Tennessee, college football’s 16th-ranked recruiting class is coming to Knoxville, and momentum from this second half finish to the season and Gator Bowl win could finally be what the Volunteers needed up on good old Rocky Top.