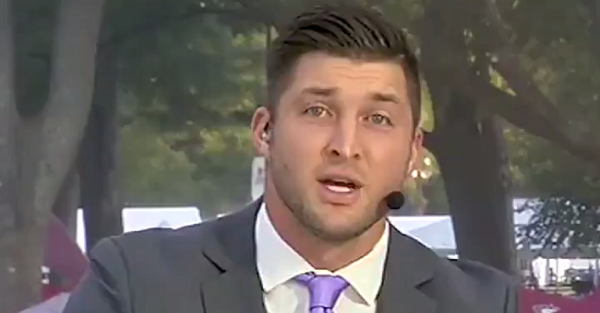 Tim Tebow is known for being a fiery competitor and he confirmed that notion with his pep talk he gave to Tennessee on SportsCenter Saturday morning. He knows Tennessee is outmatched by Alabama this weekend, but there’s still something fight for with their 3-3 record and that’s to show heart. Surely, that’s something head coach Butch Jones can appreciate.

It wasn't even 9am and @TimTebow had us ready to run through a brick wall. pic.twitter.com/UrwRpGGW0E

If that doesn’t get you wanting to run through a wall there may not be much that will. Even Elle Duncan and Matt Barrie were getting hyped in the studio all the way in Connecticut. Hopefully that can do something for Tennessee who is a 35-plus point underdog.