Watch Josh Dobbs get lit up, Tennessee survive upset bid on the luckiest play of the year 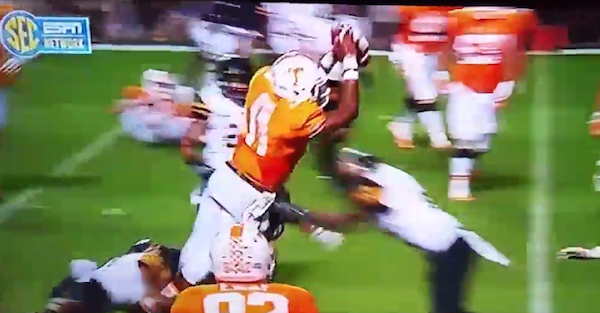 The University of Tennessee Volunteers survived on what is a contender for the luckiest play of the year.

Related: Tim Tebow thinks this SEC squad has the talent to win it all

After Appalachian State botched managing the clock in the fourth quarter, tied at 13, Tennessee had the first shot in overtime. After two failed -and goal attempts, Dobbs took the ball himself on third down and attempted to extend over the plane, only to get rocked and fumble into the end zone.

Jalen Hurd was there to luckily scoop up the loose ball for the score, Tennessee would stop App. State and survive as the No. 9 team in the country.

Even though UT won, the highlight of the night was Josh Dobbs getting the Goldberg spine buster. pic.twitter.com/tHnPVWAWVn