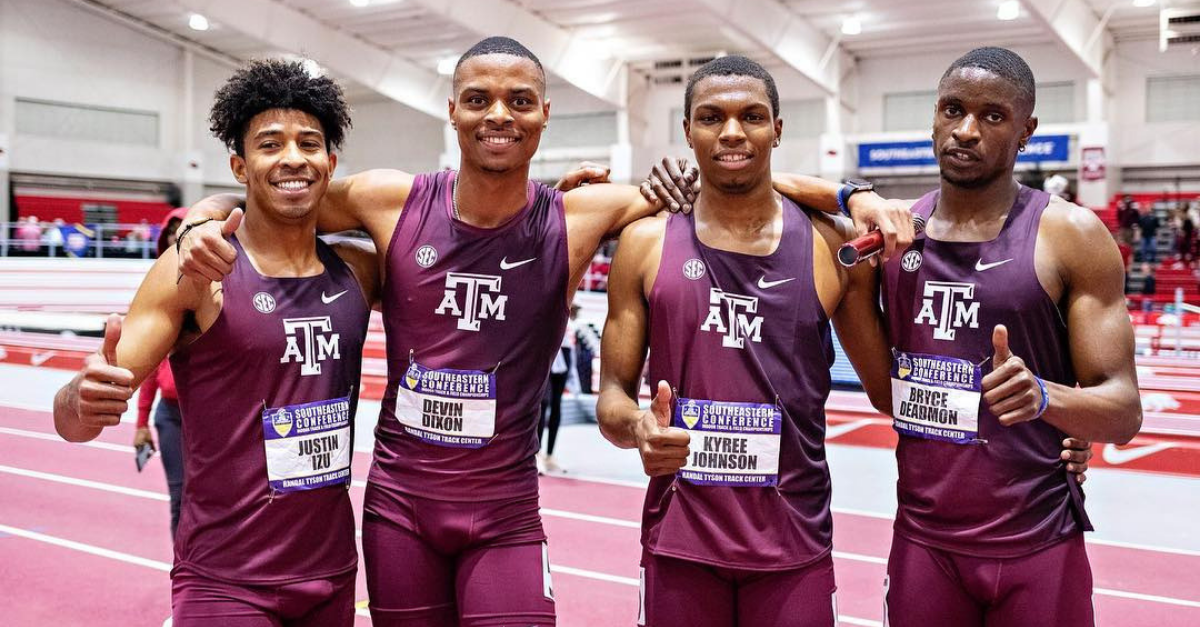 Although neither of the Texas A&M Aggies men?s or women?s track and field teams won team titles at the SEC Indoor Championships, they ran great and have a lot to look forward with the outdoor track season ahead. The Texas A&M women finished second overall, tying their highest finish at this event while the men’s team finished fifth.

The Arkansas Razorbacks ran away with the women’s meet and won the team title for the fifth-straight year, while the men?s team finished just one point shy of the Alabama Crimson Tide for fourth place. Here are just a few highlights of the Aggie wins from the SEC Indoor Track & Field Championships held in Fayetteville, Arkansas.

Texas A&M women match their highest team finish at SEC Indoor Championships with a runner-up performance. They were also runner-up in 2014.

Both the men?s and women?s team delivered some of the most exciting races of the track meet. They both won the SEC Indoor 4×400 meter relay championships. The lady Aggies 4×400 meter relay team won their first mile relay championship at this event, while this was the sixth time in seven years that the men?s relay team captured the title at this event.

The Aggies also won the men?s and women?s 800-meter SEC Championships. Jazmine Fray won the SEC Indoor 800 meter as a junior, which means she?ll be back to do it again.

"What makes a difference is my team. I love my team so much and I just want to do anything I can to support them and bring in as many points as I can."

🎧 Jazmine Fray after winning the 800

Devin Dixon won his fourth consecutive 800-meter title counting indoors and outdoors. He is also only a sophomore, so he will definitely be around for two more years to dominate this event.

In a field event, Tahar Triki won the SEC Indoor triple jump with a distance of 56 feet, 2 inches. He is a sophomore and he is only going to get stronger and improve his technique. It?s also going to be good to be able to get more points from field events to help the Aggies overall total.

The Aggies have some great talent on this team in the middle distance areas and a few of the field events that are only going to get better. If they can get some sprinters to come to College Station, they will be a force to be reckoned with in the SEC. Schools like Florida and LSU end up with most of the speedsters, but maybe having such a strong opposite side of the spectrum can get some of those runners from Florida and Louisiana to come to Texas.