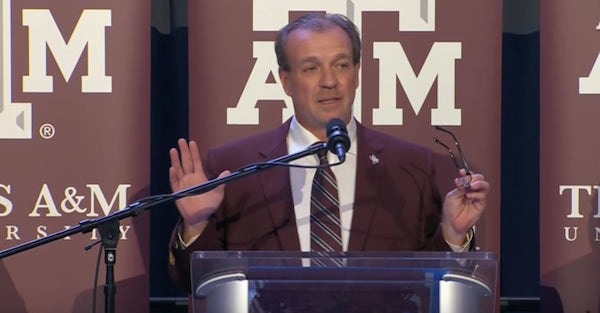 ESPN’s Booger McFarland believes Texas A&M is a “soft” program and, according to him, new head coach Jimbo Fisher agrees.

?I talked to Jimbo in Atlanta and I told Jimbo point blank ? the same thing I told you guys about Texas A&M the last several years ? Texas A&M is a soft program. Jimbo looked me in the eye and was like, ?You know what, you damn right. We are soft, but I?m going to change that,?” McFarland told The Paul Finebaum Show on Friday.

?So if Jimbo can change the biggest issue at A&M? A&M has always had talent and athleticism. They have plenty of money and speed, they have all the things you need. I think Jimbo will have every opportunity if he can change the softness problem at A&M.?

Fisher resigned as FSU?s head coach to accept the same position with the Aggies on December 1. He led the Seminoles to an 83-23 record, which included a national championship in 2013, as well as three ACC titles (2012-14) and four first-place finishes in the ACC Atlantic Division (2010, 2012-14).

A&M offered Fisher a 10-year, $75-million contract as part of president John Sharp?s plan to change the culture of A&M football from a program satisfied with mediocrity.

?Gone are the days when we settle for a good football team,? Sharp said in a press release via CBS Sports. ?We expect to compete soon for championships. Our Board of Regents and 12th Man fans are to be commended for devoting resources to facilities and now to the coaching staff to do just that.

?Beat the Hell Out of Everybody!?

The Aggies finished the 2017 season ranked fifth in the SEC West. Head coach Kevin Sumlin was fired in November after leading A&M to a 51-26 (25-23) record during his six seasons in College Station.