Johnny Manziel Rushed For His 1st TD and Never Looked Back 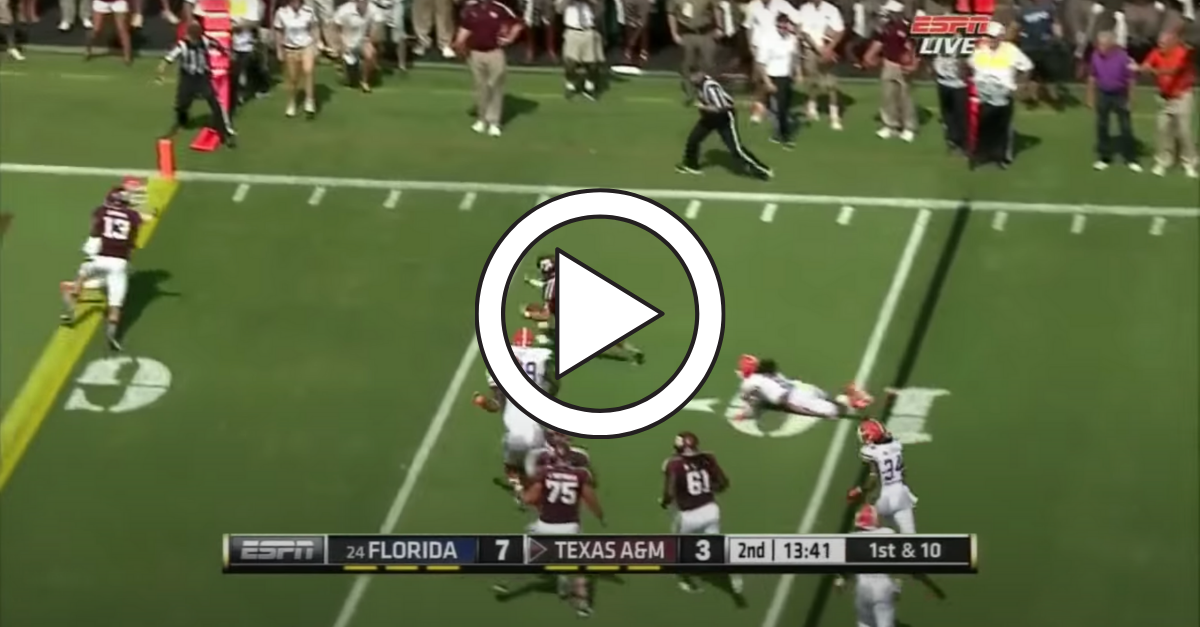 Johnny Manziel was as gifted as anyone to come through College Station, Texas. He could escape the death grips of defensive lineman (have you seen the Houdini scramble?), juke defenders, turn on his blazing speed at any moment or fire the pigskin 50 yards downfield with ease. He made college football look like backyard football.

The highly recruited quarterback came to the Texas A&M Aggies program from Tivy High School in Kerrville, Texas, and didn’t wait to make his mark on the SEC after a redshirt season in 2011. By the time his two seasons were up in Aggieland, Manziel gave birth to a tremendous nickname and became the NCAA’s biggest sensation.

The legend of Johnny Football began in 2012, when he became the first freshman to win the Heisman Trophy award. Despite losing his college debut against the Florida Gators to open that season, he flashed moments of brilliance and gave Aggie fans reasons to be excited.

Of course, Manziel’s first ever touchdown came on a run.

Head coach Kevin Sumlin threw Manziel into the fire against Florida in his first start on September 8, 2012, in front of his home crowd at Kyle Field. The Aggies were originally scheduled to play Louisiana Tech before Hurricane Isaac postponed it.

The Gators, under head coach Will Muschamp, featured one of the stoutest defenses in the country. NFL players like Dante Fowler, Matt Elam, Jonathan Bostic and Brian Poole made this a very tough unit to play against, let alone a freshman in his first-ever game.

The Heisman Trophy winner was stifled for much of the first quarter. TAMU managed just a field goal. It wasn’t until about one minute into the second quarter that Manziel scored his first-ever touchdown in the maroon. The quarterback run worked like a charm:

The Aggies wound up losing the opener, 17-20. That wasn’t all on Manziel. He threw for 173 yards, zero touchdowns and zero interceptions. He carried the ball 17 times for 60 yards, 10 of which came on the touchdown.

Losing his first ever start put a chip on Manziel’s shoulder.

He scored six touchdowns against Southern Methodist in his next game. He broke Archie Manning‘s SEC total offense record against Arkansas. He lost a close game to LSU but upon his five touchdowns against Auburn, most of which came in the first half, he entered Heisman talks.

Mississippi State was no match, either. Then Johnny Football cemented his Heisman case by defeating the Alabama Crimson Tide in Tuscaloosa. The Aggies rolled past Sam Houston State, Missouri and Oklahoma in the Cotton Bowl to finish the season 11-2 thanks to quarterback Johnny Manziel.

Manziel’s 5,116 total yards set the single-season SEC record for total offense, passing greats like Tim Tebow and Cam Newton. After the 2013 season, the Cleveland Browns drafted him in the first round of the 2014 NFL Draft.

While his professional football career never lived up to expectations, there’s no denying Johnny Football’s greatness in college.