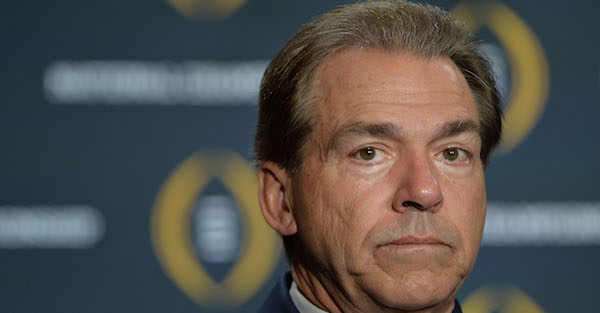 The Vanderbilt Commodores are riding high after a very impressive 14-7 win over No. 18 Kansas State. They’re feeling so good, in fact, that one of their players, defensive lineman Nifae Laelao, didn’t hesitate to call out the No. 1 ranked Alabama Crimson Tide — the team up next on Vandy’s schedule.

This is Nick Saban’s Crimson Tide mind you, perhaps one of the greatest dynastic teams not just in college football but in sports period.

That didn’t stop Laelao from coming strong after the Tide in his postgame comments, though. Here’s what he had to say to Justin Beasley of WSMV:

“We expected to get this. When you come to our house we show you how to play some SEC ball. It don’t matter where you’re from, you’re gonna know what ball we play. We’re going into next week ranked, that’s fine. Alabama, you’re next.”

#Vandy's Nifae Lealao: "We expected to get this. When you come to our house we show you how to play some SEC ball… Alabama, you're next." pic.twitter.com/koegcHRZnE

That’s some strong talk from the big man, but it’s worth noting that Vanderbilt does have a puncher’s chance against the No. 1 team in the nation, and the Commodores have that chance because of Laelao and their defense.

In three games played so far this season, Vanderbilt has given up only 13 points. That includes a 42-0 shutout of Alabama A&M and the seven points given up against the No. 18 Wildcats. The Commodores forced Kansas State into two interceptions and held their opponent to just 277 total yards of offense.

For what it’s worth, Alabama (also 3-0) just beat Colorado State 41-23, which is probably closer than it should have been.

So does Vandy have a shot? With confidence like Laelao’s…absolutely.