Side judge injured by a thrown object in the Camellia Bowl 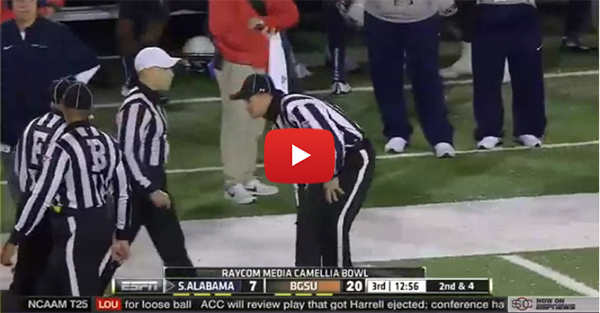 It got a bit rowdy in Montgomery during the Camellia Bowl between Bowling Green and South Alabama. After a Bowling Green player was ejected for a brutal targeting hit on a punt returner — a rare targeting/punt catch interference combo — some fans were apparently not happy and starting throwing things on the field. One of those objects hit the side judge in the leg.

There was never a great camera angle of the side judge being hit — because who expects there to be something that happens to a side judge away from the play — but the ESPN replay did try to zoom in on the wide angle shot. (Deadspin has full 2 minute video of the discussion around the incident)

As you can see, the official is running when he is struck by something causing him to pull up, and that injured him to the point that he could not stay in the game. The center judge — who spots the ball — had to move to the side judge role in his place. The head referee had to ask the crowd to stop throwing things on the field and explained that it was not a cramp as most initially thought, but that he’d actually been hit by something.

Fans throwing things on the field isn’t particularly new, but I certainly can’t remember anything actually hitting an official and causing him injury severe enough to leave the game. Especially in the CAMELLIA BOWL. I know bowl games are relatively important to fans, but I don’t think anyone should take the Raycom Media Camellia Bowl in Montgomery serious enough to throw things in disgust at an official. Actually, you should never throw things at an official.