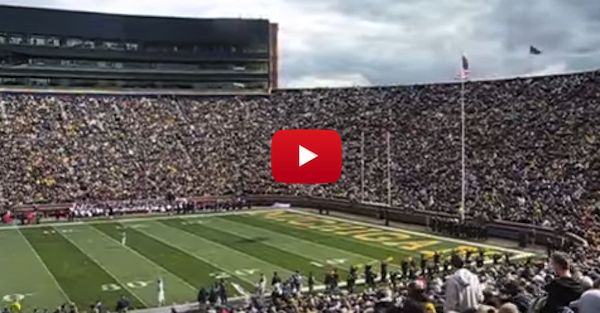 I’ll admit this right away.

There are few things that anger me more as a sports fan than other “fans” spending time and energy generating a mindless exercise during a close game, and it happens far too often. However, the video above demonstrates “The Wave” at Michigan Stadium, and it is one of the best fan-generated activities I’ve ever seen.

Matt Durr of MLive.com described it this way as part of a piece describing the overall fan experience in the Big House:

You won’t see the wave at Michigan Stadium until the third quarter and only if the Wolverines have a decent lead. Once it starts, however, it’s a sight to be seen.

Starting with two circuits of a traditional wave, the students section kicks it off. Once the first two circuits are done, a fast wave quickly makes its way around the stadium before it’s reduced to a very slow wave.

Once the slow wave is finished, the student section reverses course and send it back the other way at the original speed. On the final lap, the students split the wave in opposite directions which creates a cross-section effect around the stadium.

The video doesn’t quite do the practice justice, but you simply have to be there to experience it. I’m (still) against “The Wave” on principle, but if you’re going to do it, this is the way to go.