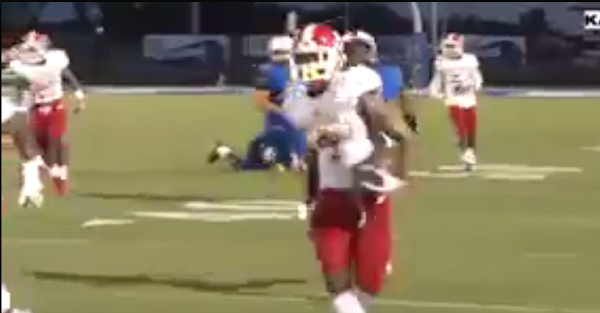 There’s been an epidemic in college football recently that seems to have made its way to the high school ranks. Players have been stupidly dropping the ball before actually crossing the end zone and it’s happened a few times this season already. Most notably, Oklahoma’s Joe Mixon and Clemson’s Ray Ray McCloud were the worst perpetrators of this.

RELATED: Ray Ray McCloud returns punt for a TD only to make the most boneheaded move of the game

Well, something similar happened in this Texas high school game. One player thought he was clear on his way to a punt return touchdown, but there was one opponent still making an effort to stop him before the goal line and he did just that. That guy completely speared the runner and he didn’t get the touchdown he thought he had while his two lead blockers stood there astonished while they just let that guy almost destroy their teammate.

Let this be a lesson, kids. Don’t ever take your eye off the field or showboat before you actually score a touchdown.