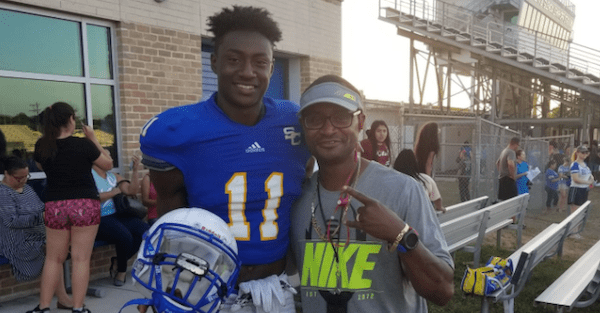 Four-star WR Tommy Bush was in Tuscaloosa, AL. for an unofficial visit Friday, and the Texas native came away from his experience at Alabama with a positive one.

The Crimson Tide have offered Bush previously, but, according to 247sports Crystal Ball predictions, the teams seriously in the running for the four star include: Baylor, Oklahoma, TCU, and Texas A&M.

God is real don't believe ask me about his love. Have to keep humble and grind!!! Thanks @jacassoeditz for the Fire edit!! pic.twitter.com/o7kNDqeDBs

Still, Bush’s comments from his time at Alabama Friday seem to suggest the Crimson Tide at pulling Bush away from the midwest to the SEC.

“Bama, they really impressed me,” Bush told BamaOnLine. “After talking with the coaches, seeing the campus, seeing the depth chart at receiver and who they’re going to need, I feel pretty confident about it. I believe they’ll have my interest for sure.”

It should be interesting to see if the Crimson Tide are able to swing Bush away from the two favorites at the moment: Baylor and Oklahoma.