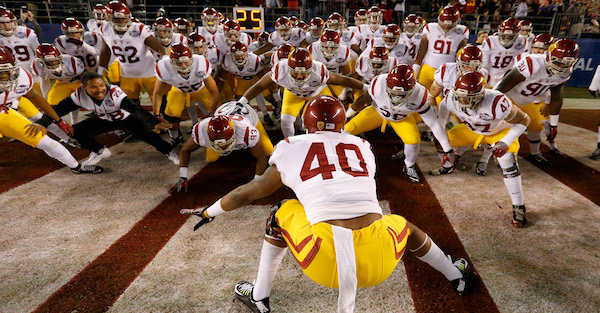 According to TMZ, authorities are investigating allegations that  two USC teammates —linebacker Osa Chad Masina and defensive end Don Hill — raped a woman in July. Neither Masina nor Hill have been charged, but in addition to initially suspending Masina, USC has also suspended Hill, both for a “violation of team rules.”

Related: Nick Saban says Alabama has to watch out for this guy, who is USC’s “Dez Bryant type of receiver”

Per the report, authorities executed a search warrant to obtain the cell phone and a DNA sample of Masina, who is under investigation for drugging and raping a woman twice.

The woman told investigators she was at a frat party with Masina in July, when he gave her Xanax pills and wine. She said she went  to Hill’s apartment, where she was “out of it” and claims to remember having sex with Masina but felt she had no control during the encounter. She also claims Masina recorded the encounter on his phone, taking pictures and videos of the encounter before sending them to her ex-boyfriend, a football player at Arizona.

According to ESPN, the ex-boyfriend received the video and admitted the woman “did not appear to be alert.” In that report, she noted she “didn’t feel like she was in control.”

A former five-star recruit, Masina came to USC as the No. 3 overall OLB in the country. Masina appeared in 12 games last season, registering 25 tackles and one fumble return for a touchdown.