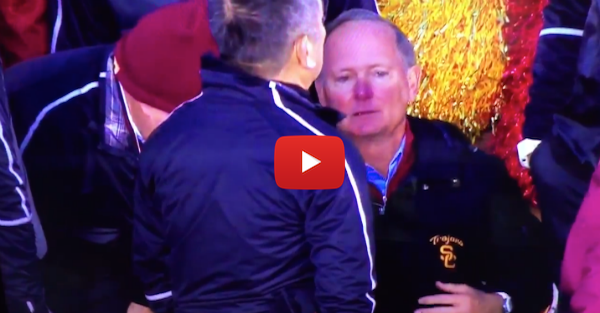 USC athletic director Pat Haden had a scary moment before kickoff against USC and No. 14 Notre Dame. Haden, who was on the field in South Bend during pregame warmups, unexpectedly collapsed while on the USC sideline.

Video of #USC AD Pat Haden on the sideline pregame from NBC. pic.twitter.com/J491No5BFZ

According to reports, he was evaluated by trainers after the incident.

USC athletic director Pat Haden collapsed on the field during pre-game. He is currently getting looked at back in the locker-room area.

It’s been a tumultuous week for the Trojans, as Haden fired former SC head coach Steve Sarkisian on Monday evening, just one day after placing him on an indefinite leave of absence.