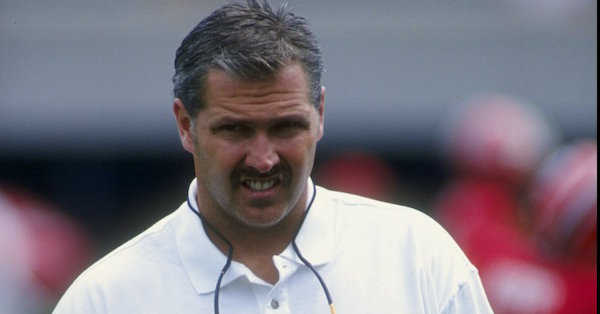 Scott Halleran/Getty Images
19 Sep 1998: Head coach Dana Dimel of the Wyoming Cowboys looks on during the game against the Georgia Bulldogs at the Sanford Stadium in Athens, Georgia. The Bulldogs defeated the Cowboys 16-9. Mandatory Credit: Scott Halleran /Allsport

It was a season to forget for the UTEP Miners as they stumbled to an 0-12 season, and fifth-year coach Sean Kugler was fired on Oct. 2.

Former coach Mike Price filled in on an interim basis, and now the school has found a its next full-time coach. The Miners hired Kansas State offensive coordinator Dana Dimel, who has been the OC for the Wildcats since 2009.

Related: Arkansas has reportedly hired its next head coach

Dimel was previously the head coach at Wyoming and Houston, where he compiled a combined 30-39 record.

He said in a statement that he’s looking forward to the challenge of turning around the program.

“I’m greatly looking forward to the opportunity at UTEP to build a program utilizing a ‘1-0’ concept,” Dimel said via College Football Talk. “I would like to thank President Natalicio and Jim Senter for the opportunity.  We will work diligently to elevate UTEP football to the highest level in Conference USA.  Having been a part of a major turnaround at Kansas State and having the success we did at Wyoming, I’m just really excited about the leadership challenge that’s ahead.”

The Miners last made a bowl game in 2014, so Dimel will have his work cut for him. He spent nearly the last decade working under Bill Snyder, so he’s learned from one of the best in college football.