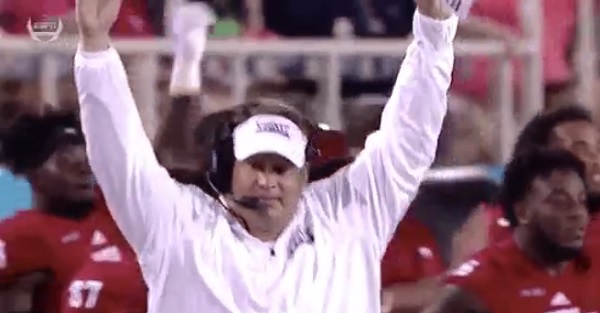 Lane Kiffin has seen enough football to know when his team is about to hit a big shot, and that’s exactly what his FAU Owls did on college football’s opening Friday night against Navy.

In his first game as the FAU head football coach, Kiffin’s players executed a touchdown pass just the way he drew it up with the team down 7-3 with 7:45 to go in the second quarter. On first and 10 from the FAU five yard line — way in the shadow of their own goal line — wide receiver Willie Wright hit a huge “okie-doke” ok Navy, basically hitting a “Sluggo” (slant and go), which left him wide open and created an easy pass and catch for quarterback Daniel Parr.

Parr tossed the ball in the air and Kiffin was already celebrating before it landed in Wright’s hands. Of course, Wright was wide open, and it was a brilliantly executed fake, but Kiffin didn’t even wait to see if his receiver was going to catch the ball before he got his party on.

Watch the bottom of the screen. Lane knew FAU had this one. pic.twitter.com/FdJOu3ktM0

Lane Kiffin knew he had a touchdown early! pic.twitter.com/3tXk5x7naH

Had the FAU receiver dropped the pass Kiffin’s jubilation would have quickly turned to heartbreak, but it’s worth noting that the FAU ball coach does have a history of calling his shot and seeing the big play before it even breaks. SB Nation did a good piece on that, which you can read here.

Kiffin, the former head coach of Tennessee, USC, and even the Oakland Raiders, has seemingly taken a step back to coach FAU from his last post as Alabama offensive coordinator, but that doesn’t seem to bug him.

It’s certainly not hampering his excitement on the sideline, either.