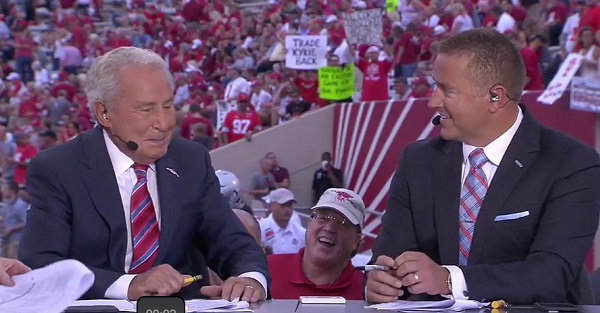 Lee Corso was the head coach over the Indiana football team for a decade, and on Thursday, Corso made his return to Bloomington as College GameDay made their first ever television appearance at the school.

Near the end of the show, Corso had some emotional moments recalling his time at Indiana, as the GameDay crew surprised him by inviting some of Corso’s former players onto the set.

“Remember I told you, when a coach dies, he leaves pieces of him in his players,” an emotional Corso told Kirk Herbstreit. “There’s pieces of me right there.”

Corso was later honored by his former players on the field during a break between the quarters.

Despite the clear emotion and return to Indiana, Corso is still a professional man; he set the emotions aside and picked Ohio State to win the game in what had to be a rough pick for the 82-year-old.