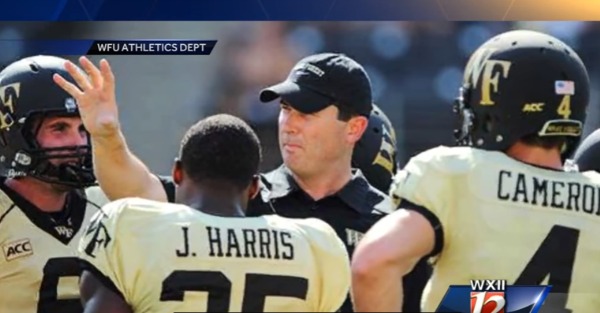 Just over a month ago, gameplan documents belonging to the Wake Forest Demon Deacons were discovered at Papa John’s Cardinal Stadium one day before a game between Louisville and Wake Forest.

The incident resulted in a month-long investigation that, according to the News & Observer, concluded Tuesday with Wake Forest having to name one of its own — radio announcer Tommy Elrod — as the culprit.

In a statement released by the university, officials said that based on emails, text messages and phone records, Elrod “provided or attempted to provide confidential and proprietary game preparations on multiple occasions, starting in 2014.?

No one else associated with the football program or athletic department was involved, the statement said.

The school’s athletic director, Ron Wellman said he was saddened by the discovery.

?I have known Tommy Elrod since his days as a player on our football team,? Wellman said in a statement. “I?m deeply disappointed that he would act against Wake Forest, our football team and our fans in such a harmful manner by compromising confidential game preparation information.”

Elrod, who played for Wake Forest from 1993-1997, was employed as a graduate assistant on the team for 11 seasons, but was not kept on by current coach Dave Clawson. He was then hired by the IMG radio network as a football analyst, where he was employed at the time of the incident. He has reportedly been terminated by IMG and banned from the university.

Clawson was outraged that a member of the Wake Forest family could have perpetrated what he described as a betrayal.

?It?s incomprehensible that a former Wake Forest student-athlete, graduate-assistant, full-time football coach, and current radio analyst for the school, would betray his alma mater,” he said. We allowed him to have full access to our players, team functions, film room, and practices. He violated our trust which negatively impacted our entire program.”

Officials did not reveal any motivation for Elrod’s actions.