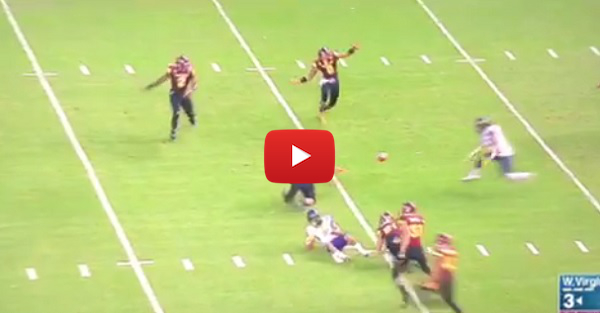 The Immaculate Reception that occurred in a game between the Pittsburgh Steelers and the Oakland Raiders in 1972 is perhaps the most famous play in all of football. Well, West Virginia and Arizona State gave their own rendition of the play on Saturday night in the Cactus Bowl.

West Virginia quarterback Skyler Howard dropped back for a pass in the first quarter, throwing the ball downfield to one of his receivers. However, the receiver was hit as soon as he caught the ball, forcing the ball up and in the air. One Arizona State defender then tried to catch the loose ball, but then he bobbled it straight back to a different West Virginia receiver, who made the catch.

Of course, this play didn’t have the impact that the Immaculate Reception did, but damn, it’s like a game of pinball broke out on the football field.