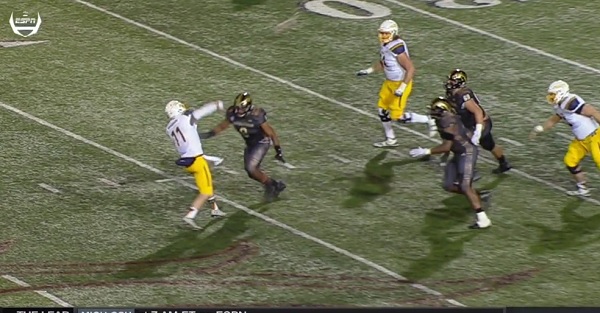 Even on iffy targeting calls, you can understand why college football wants to get those kind of hits out of the game. Blatant hits to the head aren’t good for anyone, especially when tackling with your head down is just a bad idea altogether.

However, this one here? This wasn’t an iffy targeting call; it was a bad one.

Western Michigan’s Caleb Bailey was ejected for this play, where he made contact with Toledo quarterback Logan Woodside just after he released the ball. There was not penalty called on the field, but after a booth review, a targeting penalty was called and Bailey will be forced to miss the first half of the MAC Championship Game as a result.

There was no helmet-to-helmet contact here, but that isn’t required for a targeting call. The ref on the call cited Woodside as a defenseless player, and that there contact to the head, but there wasn’t either of those things. Bailey pushed him right in the shoulder pads right after Woodside got the ball away.

The fact that Bailey must know miss part of his league’s title game as a result? That’s just sad.