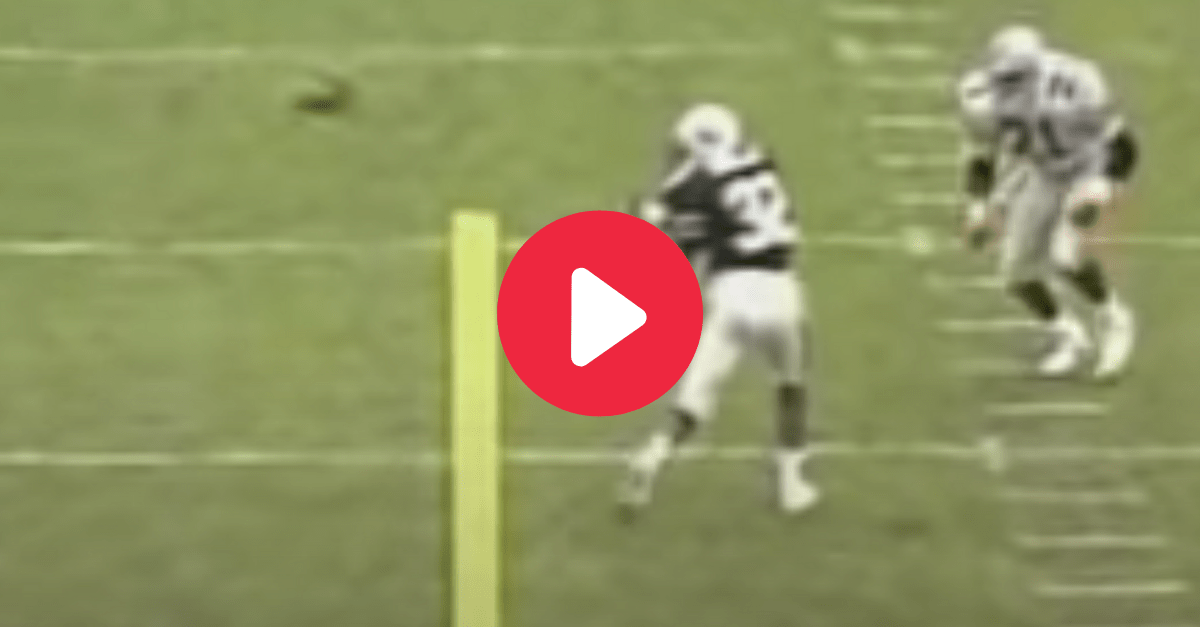 Back in the day, big hits were the name of the game. Cracked teeth and flying helmets were merely part of the risk of making a play. Football changed over the years, but a bone-crushing tackle lasts forever and might even make the opposing team open a can of whoop-ass of their own.

During the 1990 Hall of Fame Bowl ? now famously known as the Outback Bowl ? Ohio State Buckeyes star Zack Dumas laid perhaps the biggest football hit of all time. It knocked the wind out of Auburn Tigers running back Stacey Danley, certainly, but it was felt by everyone at Tampa Stadium in Florida that afternoon or watching the national broadcast on NBC.

“When Stacey got nailed that woke us up,” Auburn center John Hudson said, via the Sun-Sentinel. “I said we’re going to get killed if we don’t do something.”

Instead of retaliating with violence, the Tigers took it out on the scoreboard. The Buckeyes didn?t stand a chance in the second half after Dumas? vicious hit, and it sparked a comeback for the ages.

Facing 3rd-and-4 in their own territory, Auburn quarterback Reggie Slack dropped back and fired the ball to running back Stacey Danley in the flat. He looked open enough to get the first down. Then, OSU?s Zack Dumas closed fast and delivered one of the biggest hits in college football history.

Dumas laid the boom on Danley in a big-time way. So much so that the running back laid on the ground in pain as the Ohio State football players celebrated on the field. It took a few minutes for him to get to his feet, but he ran off the field as a direction by Auburn head coach Pat Dye.

“It’s been a long time since I’ve seen anyone hit that hard than Stacey was hit today,” Dye said. “When I went out there, Stacey looked like he had a hard time getting his breath. I said, ?Stacey, when you get up if there’s any way, you have to run off this football field. Don’t you dare let those Ohio State players think they’re tougher than you are.??

From that moment on, Auburn dominated. The Tigers scored 28 unanswered points and won 31-14, while Slack took home MVP honors.

On paper, Auburn was a much better football team. The Tigers won 10 games that season, including boasting a 6-1 record and win over Alabama in the tough SEC. Meanwhile, Ohio State University won eight games but failed to beat Michigan or win the Big Ten that season.

So while the result wasn?t overly surprising, it took that hit to wake up the Tigers.

“I think a lot of people were shocked and stunned at the hit,” Danley said. “A lot of players said it was the turning point. If I have to take a lick to get the players going, then I’ll do it every time.?

Danley is a warrior for taking the hit like a champ because not many players at the NFL or NCAA level would run off the field after getting leveled. It?s a reason why he?s a legend, and Auburn was a successful program that season.

MORE: Monster Hit Knocks Punter Into Next Week, Maybe Even Next Year