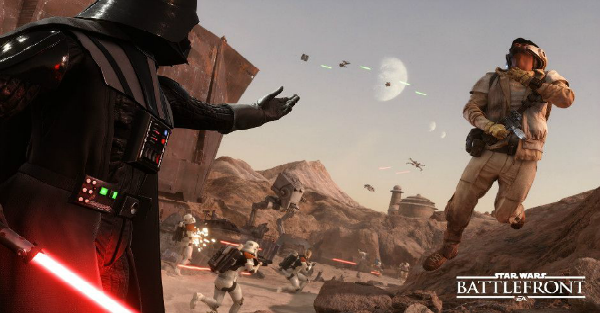 In a seemingly benevolent response to this past weekend’s outrage, publisher Electronic Arts recently issued a statement regarding the controversially high costs of heroes in Star Wars: Battlefront 2. According to the post, those heroes locked behind exorbitant pay walls have had their price reduced by 75%. Luke Skywalker and Darth Vader now cost 15,000 in-game credits (down from 60,000), Leia Organa, Palpatine, and Chewbacca now cost 10,000 (from 40,000), and Iden Versio costs 5,000 (previously 20,000).

Unfortunately for fans excited over this development, it seems that EA hasn’t quite reversed its stance. Alongside these price reductions, the studio has also quietly reduced the rate at which players earn credits, according to a recent piece by Game Informer.

Completing Star Wars: Battlefront 2’s campaign now yields a reward of 5,000 credits, a significant reduction from the previous 20,000. The Arcade mode, meanwhile, doesn’t even give credits at all anymore. These changes come across as devilishly underhanded to many, and have only further enraged much of a community already frustrated at the publisher’s “pay-to-win” tactics in its other games.

This frustration previously hit its peak this past weekend, when the company’s Reddit account received 300,000 downvotes – the lowest in the website’s history and more than 10 times any amount seen prior – for responding to one of the site’s many discussions regarding the matter. The developers, meanwhile, saw similar heat; one reported vicious personal attacks and even death threats over Twitter in response to the prices (which he probably has nothing to do with).

So I’m up to 7 death threats, and over 1600 individual personal attacks now (and yes, for legal reasons I’m keeping track). And why, you might ask? Because of an unpopular feature in a game.

Despite the apparent unending hostility directed towards the publisher, EA Executive Producer John Wasilczyk has promised to host an AMA or “Ask Me Anything” thread over Reddit tomorrow. The AMA will be held by numerous leads on the development team, and while it’s just as likely to be a total disaster as it is an enlightening take on the situation, users can at least expect a good show. See EA’s Twitter account @EAStarWars for future updates regarding that.

As for the actual game – Star Wars: Battlefront 2 launches this Friday for the Xbox One, PlayStation 4, and PC at $59.99. For more information about the title, feel free to check out our selection of previous articles, which have covered everything from today’s controversy to the latest announcements and features.